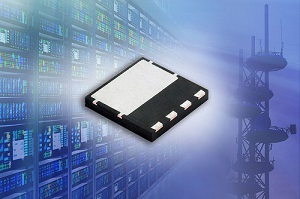 Built on energy-efficient E Series superjunction technology, the SiHH070N60EF features low typical on-resistance of 0.061 Ω at 10 V and ultra-low gate charge down to 50 nC. The device’s figure of merit (FOM) of 3.1 Ω*nC is 30 % lower than alternative MOSFET in the same class. These values translate into reduced conduction and switching losses to save energy.

For improved switching performance in zero voltage switching (ZVS) topologies such as LLC resonant converters, the SiHH070N60EF provides low effective output capacitances Co(er) and Co(tr) of 90 pf and 560 pF, respectively. The device’s Co(tr) is 32 % lower than other MOSFET in the same class.

Offered in the PowerPAK 8×8 package, the device is RoHS-compliant, halogen-free and can withstand overvoltage transients in avalanche mode with guaranteed limits through 100 % UIS testing.

Samples and production quantities of the SiHH070N60EF are available now from Vishay Intertechnology.