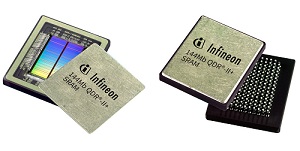 Over the last decade, the aerospace industry has experienced a paradigm shift, moving from on-ground to on-system data processing using new technologies with increased computational power and lower latency.

The high-performance 144-Mb QDR-II+ SRAM operates up to a maximum frequency of 250 MHz, delivering up to 36 Gbps throughput in a 165-ball Ceramic Column Grid Array (CCGA) package. The device is rad-hard for up to 200 krad(Si) and is latch-up immune, improving system reliability in harsh environments.

Originally developed as an industrial networking memory, the QDR-II+ SRAM is now used as a baseline design for rad-hard memory employing the RadStop technology, Infineon’s proprietary design and process hardening techniques that enable a higher level of radiation performance while delivering the throughput demanded by space-bound applications.

The QDR-II+ SRAM reduces the overall system complexity in radar and imaging applications by delivering a higher performance that enables on-system satellite image processing with better resolution and faster processing speeds (unlike DRAM with higher latency and memory bank restrictions).

“As a provider of high-density QDR-II+ SRAMs in the market, our successful QML-V qualification once again exemplifies the inherent product capabilities of our commercial off-the-shelf components to meet the most stringent requirements of high-reliability market segments,” said Helmut Puchner, VP Fellow of Aerospace and Defense at Infineon Technologies LLC.

The 144-Mb QDR-II+ SRAM is available now in x18 or x36 bus-width configurations and with on-die-termination in a 2 or 4-word burst mode for design flexibility. The device is certified to the DLA Qualified Manufacturers List Class V (QML-V), a high quality and reliability standard certification for aerospace-grade ICs.