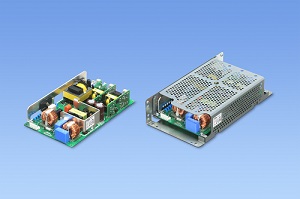 The RBC300F accepts input voltages of 85 to 264VAC, single-phase and delivers an output power of 300W, rendering it suitable for worldwide applications. To reduce complexity and to offer high flexibility, the RBC300F features three independent outputs:

Applications in robotics control are often powered by 24V or 48V bus voltage. In such applications the distribution bus might be subject to repetitive peak energy demand, requiring the power supply to sustain such load conditions. The RBC300F 24V and 48V output modules, therefore, operate efficiently in peak load conditions and can sustain up to 150 per cent peak current.

The reinforced isolation of output three is suitable to supply voltages to IGBTs or IPMs, which reduces the number of power supplies required to power robotic controllers. By integrating a reinforced isolated output, the ‘three in one’ RBC300F has an equivalent footprint 40 per cent lower than conventional solutions.

To optimize efficiency, the master output DC-DC converter is based on an LLC resonant topology when the second and third outputs are using Quasi-Resonant-Flyback topology. The RBC300F has built-in inrush current limitation, overcurrent and overvoltage protection.

The product is designed for convection cooling and can be operated from -20 to +70 degrees Centigrade. Depending on the final equipment assembling and cooling conditions, a derating may apply.
To accommodate application-specific requirements, several options are available including Coating (C), Low leakage current (G), (S) (SN) different type of chassis and cover, (R) ON/OFF remote control, (T) Vertical screws on terminal block, (U1) External hold-up capacitor input.

For extended flexibility the RBC300F option (I3) features an Extended-UART (Universal asynchronous receiver-transmitter) digital interface supporting 49 commands for monitoring, controlling and sequencing. Operating data can be stored and locked inside the internal memory, and recorded error codes can be used for analysis and the recording of operational hours for preventive maintenance.