This Capacitor Can Handle Inrush Currents 500 Times The Rated Current

TDK Corporation has added the B25674C and the B25674C to the PhaseCap Energy Plus series of EPCOS PFC capacitors. The B25674C* is gas-impregnated series and covers a voltage range from 230 V AC to 690 V while the B25675C* series capacitors are impregnated with a biodegradable resin and are capable of handling voltages from 230 V AC to 1000 V AC. Both the series can be used at hotspot temperatures up to 85 °C permissible and have a long lifetime of up to 240,000 hours in temperature class -40/D, class IP20 touch-proof terminals, and pre-mounted ceramic-based discharge resistors. 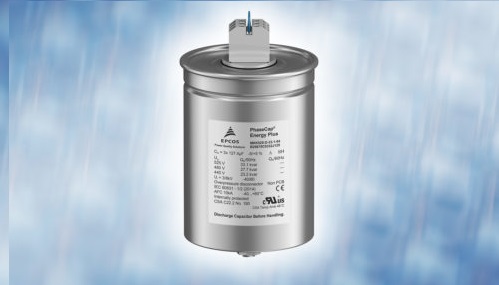 According to the company, the B25674C* series which is a gas-impregnated series offers compensation ratings from 5 kvar to 33.1 kvar while covering a voltage range from 230 V AC to 690 V AC. The B25675C* series capacitors are suitable for higher voltage rating than the other series as it is rated for voltages from 230 V AC to 1000 V AC, with compensation ratings of up to 60 kvar.

The company claims that the capacitors offer up to 15,000 switching operations per year, double the amount of previous types. For short periods, the series can be operated at a temperature of 60 °C, with hotspot temperatures of up to 85 °C permissible. These capacitors are capable of handling high inrush currents due to their robust winding design with wave-cutting technology and can safely handle inrush currents equivalent to 500 times the rated current. Furthermore, the capacitors are self-healing and CE and UL certified. They also feature an internal overpressure disconnector that can disconnect the mains from all three phases in the event of an overload. The capacitors feature class IP20 touch-proof terminals and have pre-mounted ceramic-based discharge resistors.

These capacitors are highly reliable with long shelf life making them suitable for a wide variety of applications such as the capacitor banks, individual and group compensation, fixed and switched compensation systems as well as dynamic PFC systems.