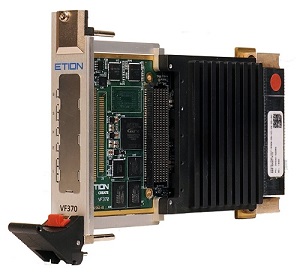 The VF370 features a single, dual or quad-core Intel Atom processor operating at up to 2GHz for running post-processing software. An onboard SATA SSD provides fast booting and reliable high-performance storage for demanding applications while associated onboard peripherals include 4GB of associated DDR memory, a real-time clock (RTC), elapsed time indicator (ETI), EEPROM and Flash for user configuration data and logs.

The addition of a VITA 57 FMC site creates a modular processing solution that facilitates a wide range of I/O requirements through the utilization of FMC mezzanine cards. The high pin count FMC connector connects to the FPGA through four high-speed serial interfaces (HSSI) lanes and 58 differential LVDS/LVTTL signals while an optional FMC I/O connector routes 32 differential pairs to the P2 VPX connector for backplane or rear I/O functionality.

A configurable PCIe interface supports different OpenVPX profiles at Gen1 and Gen2 speeds equipping the VF370 with high data throughput capability. The VF370 typically operates as a VPX system controller but can also be a PCIe end-point module when plugged into a non-system slot. The VF370 Board Management supports Tier 1 IPMC functionality on the VPX Management Plane as per VITA 46.11 specification. To simplify development and system integration, USB debug interfaces are provided for the Intel Atom embedded processor and the Cyclone FPGA.

“The VF370 is a powerful 3U OpenVPX SBC module for SWaP applications and the first to combine the strengths of Intel’s Atom E3900 embedded processors with Intel’s well-established Cyclone FPGA technology,” said Flemming Christensen, Managing Director of Sundance Multiprocessor Technology. “Available in both standard and ruggedized versions and with an integrated, high-performance graphics processor, it is ideally suited to the rapidly growing range of applications from industrial control and automotive to mil/aero and UltraHD video, that not only demands high performance but also feature reduced size and weight requirements.”

Ensuring Security In The New Golden Age Of Computer Architecture