New research from Unisys Corporation reveals that law enforcement is expected to lead the incorporation of biometrics into wearable technology. However privacy concerns around the security of biometric data stored in the cloud need to be addressed as adoption becomes more mainstream.

The survey of 54 biometrics professionals was conducted by Unisys at the Biometrics Institute Asia Pacific Conference held in Sydney, May 24-26, 2016.

Wearable technology are devices or computers that can be worn on the body and typically have communications functionality, enabling data to be exchanged between a network and the device. Biometrics refers to a variety of technologies in which unique attributes of people are used for identification and authentication such as a fingerprint, iris print, hand, face, voice or gait.

The majority of surveyed biometric professionals, 63 percent, say that enabling law enforcement and security officers to identify known or suspected criminals or terrorists is the most appropriate opportunity to incorporate biometrics into wearable technology – with far less support for consumers using smart watches to authenticate payments (19 percent) or using biometrics to control access to data captured by wearable devices (14 percent). 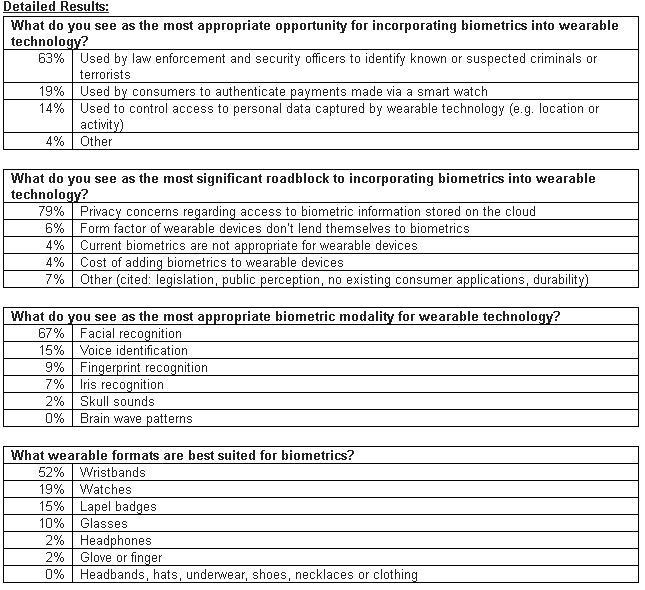 Privacy concerns regarding access to biometric information stored on the cloud is cited as the most significant roadblock to incorporating biometrics into wearable technology (79 percent). Technology, format and cost are not generally viewed as impediments.