NEC Corporation today announced the development of a control technology that doubles the efficiency of autonomous mobile robots (AMR) in warehouses while maintaining a high level of safety. NEC plans to put this technology into practical use by March 2024 and to have it installed in NEC’s cooperative AMRs in Japan.

In recent years, the introduction of robots for transporting materials has accelerated due to labor shortages and large warehouses. However, even when robots have been introduced to automate transport work, it has been necessary to reduce travelling speed to ensure safety, and the improvement of transport efficiency has become a challenge. Since it has been necessary to construct passageways and areas dedicated to mobile robots in order accelerate speed while ensuring safety, it has been difficult to introduce robots into existing warehouses. 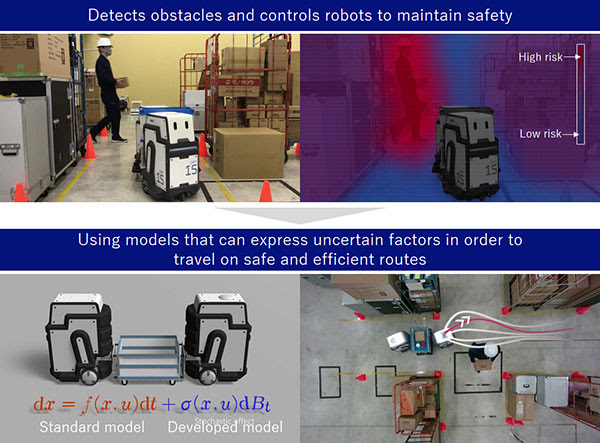 However, NEC has developed “risk-sensitive stochastic control technology”(*) that can control autonomous mobile robots and meet safety demands. This has been accomplished by utilizing models that can express uncertain factors that vary from one site to another, such as sensor measurement errors and differences between simulation results and actual robot movements. Moreover, this new technology has adopted methods that have been used in actuarial finance.

As a result, robots can autonomously determine when to travel at high speed, and over the shortest distances, such as when traveling in low risk locations without workers, objects on the floor or other obstacles. Conversely, robots will travel at a low speed when using routes that are determined to be high risk locations. When comparing transport work between a robot applying this technology and a conventional robot, it was confirmed that the work time was halved and the transfer efficiency could be doubled while ensuring safety. In addition, safety and efficiency can be achieved without dedicated robot areas, making it easy to install in existing warehouses.

Going forward, NEC will continue to develop these technologies through on-site demonstration experiments, aiming for their early installation in autonomous mobile robots for a wide range of industries.