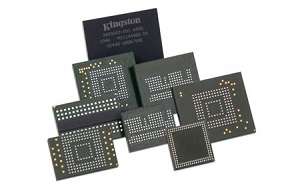 Kingston eMMC is an embedded, non-volatile memory system, comprised of both Flash memory and a Flash memory controller, which simplifies the application interface design and frees the host processor from low-level Flash memory management. eMMC is a popular storage component for many consumer electronic devices, including smartphones, tablets and Mobile Internet Devices. It is increasingly adopted in many industrial and embedded applications.

For developers, eMMC simplifies the interface design and qualification process, resulting in a reduction in time to market and facilitates support for future Flash device offerings.

Small BGA package sizes and low power consumption make eMMC a viable, low-cost memory solution for mobile and embedded products. To better meet the requirement of many space-constrained wearable and IoT applications, Kingston has released a small eMMC package with standard JEDEC footprint. The technical specifications of eMMC are managed by JEDEC, the global leader in developing open standards for the microelectronics industry.

Kingston’s I-temp eMMC product complies with the latest JEDEC eMMC standard and is backwards compatible with previous eMMC standards. It has all the advantages of standard eMMC and the operating temperature range of the device meets industrial operating temperature requirements (-40 degrees Celsius to 85 degrees Celsius), making it an ideal storage solution for harsh outdoor environments and automotive applications.