To help explain the formation, evolution and behaviour of large-scale structures in the universe such as galaxies, scientists have predicted the existence of dark matter. In fact, theory suggests that the universe may actually contain up to five times more dark matter than ordinary matter! While the question of what actually makes up dark matter remains unanswered, scientists have identified a number of candidate particles. Some of the more promising ones are axions that may be just a ten-trillionth of the mass of an electron. In South Korea, at the Institute for Basic Science (IBS), they have assembled a team of experts to study and try to find axions. A fast PCIe digitizer by Spectrum Instrumentation was chosen for the latest and most advanced experiments.

It is predicted that axons will convert into photons in the presence of a strong magnetic field. So, the Korean team has built a new laboratory that uses super powerful magnets to try and create that precise scenario. Imaging of the phenomenon is done using a haloscope, that in turn uses a fast data acquisition system (DAQ) to capture, analyze and store the results.

At CAPP, the Center for Axion and Precision Physics Research at the IBS, the plan is to conduct a variety of experiments over the coming decade to confirm the existence of axions and ultimately determine their properties. The first experimental results are already in. The team at CAPP has searched for axions with a mass between 6.62 and 6.82 μeV that correspond to the frequency between 1.6 and 1.65 GHz. The search was made using the CAPP apparatus shown in figure 1. The researchers showed experimentally with a 90% confidence level, which is the most sensitive result in the mass range to date, that there is no axion dark matter or axion-like particle within that range.

A key component of the laboratory’s most recently implemented data acquisition system is a Spectrum Instrumentation PCIe Digitizer card, model M4i.4470-x8. The scientists chose this unit as it can sample the incoming signals on two channels simultaneously, at rates up to 180 MS/s and with 16-bit vertical resolution. Importantly, the collected data can be streamed to a computer, over the PCIe bus, at a transfer speed in excess of 3 GB/s. This means that all of the data can be acquired and sent to the host computer with none of it being lost. A block diagram of the typical experimental setup is shown in figure 2.

Dr ByeongRok Ko, Research Fellow at CAPP, explains, “Our aim was to improve the figure of merit in axion haloscope searches, i.e., the scanning rate. First, we realized a practical DAQ efficiency of greater than 99% for a single channel, where the DAQ process includes the online Fast Fourier Transforms (FFTs). Then, using an IQ mixer and two parallel DAQ channels, we implemented software-based image rejection without losing the DAQ efficiency. This is more than twice the efficiency of earlier setups, which were based on using a conventional spectrum analyzer.”

Image rejection is important as axion haloscope searches generally employ a heterodyne receiver which introduces unwanted image backgrounds. As such, image rejection becomes essential for maintaining a high scanning rate. In this case, the fast DAQ system provides an image rejection of about 35 dB, over a frequency range from 600 to 2200 MHz. “There are two important features of the Spectrum digitizer card that enable this which is why we chose it,” says Dr. ByeongRok Ko. “First, the on-board memory of 2 GSamples, which can be used as a buffer, and second, a FIFO transfer mode over the PCI Express x8 Gen2 interface, that allows the continuous data streaming at speeds of greater than 3 GB/s.” 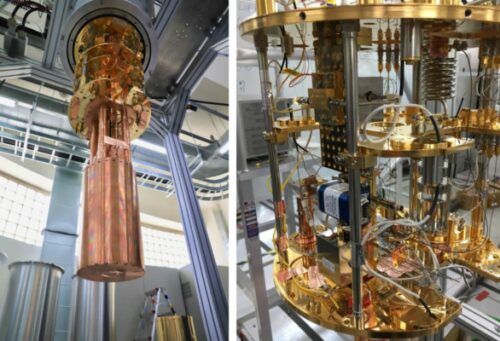 Another challenge for the DAQ system is the post-processing of the data. This includes unit conversion, online FFT, averaging, and writing the power spectra to disk storage. The online FFT dominates the post-processing time. In most cases, axion haloscope experiments require data at different resonance frequencies because the axion mass is unknown. Also, for various reasons, the data at each resonance frequency can be divided into several subsets at different timestamps. In such cases, the post-processing can be performed in parallel while the next data is being acquired. Fortunately, the Spectrum Instrumentation digitizers come with drivers that support a wide range of programming languages, one of which is Python. Python’s multiprocessing module is ideal for this type of application and was subsequently used to demonstrate the above scenario.

Yannis K. Semertzidis, the director of CAPP and also a professor of KAIST (Korea Advanced Institute of Science & Technology), explains, “This experiment is not a 100-meter sprint but the first goal in a marathon run. We learned by doing it, and we tested new concepts to be used at higher-level systems in the future.” The team proved they can reach much better sensitivity than all other experiments previously done over the target frequency range. The plan now is to scale up their experiments with larger systems.