The demand for increased bandwidth and security in network infrastructure driven by growth in hybrid work and geographical distribution of networks is re-defining borderless networking. Led by AI/ML applications, the total port bandwidth for 400G (gigabits per second) and 800G is forecasted to grow at an annual rate of over 50%, according to 650 Group. This dramatic growth is expanding the transition to 112G PAM4 connectivity beyond just cloud data center and telecom service provider switches and routers to enterprise ethernet switching platforms. Microchip Technology Inc. is responding to this market inflection with the META-DX2 Ethernet PHY (physical layer) portfolio by introducing a new family of META-DX2+ PHYs. These are the industry’s first solution set to integrate 1.6T (terabits per second) of line-rate end-to-end encryption and port aggregation to maintain the most compact footprint in the transition to 112G PAM4 connectivity for enterprise ethernet switches, security appliances, cloud interconnect routers and optical transport systems.

“Introduction of four new META-DX2+ Ethernet PHYs demonstrates our commitment to supporting the industry transition to 112G PAM4 connectivity powered by our META-DX retimer and PHY portfolio. In conjunction with our META-DX2L retimer, we now offer a complete chipset for all connectivity needs from retiming, gearboxing, to advanced PHY functionality,” said Babak Samimi, corporate vice president of Microchip’s communications business unit. “By offering both hardware and software footprint compatibility, our customers can leverage architectural designs across their enterprise, datacenter, and service provider switching and routing systems that can offer pay-as-you-need enablement of advanced features including end-to-end security, multi-rate port aggregation, and precision timestamping via software subscription model.” 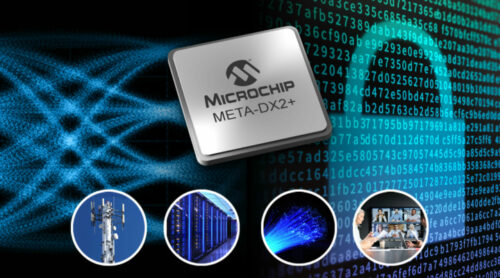 Like the META-DX2L retimer, the new series of META-DX2+ PHYs can be used with Microchip’s PolarFire® FPGAs, the ZL30632 high-performance PLL, oscillators, voltage regulators, and other components that have been pre-validated as a system to help speed designs into production.