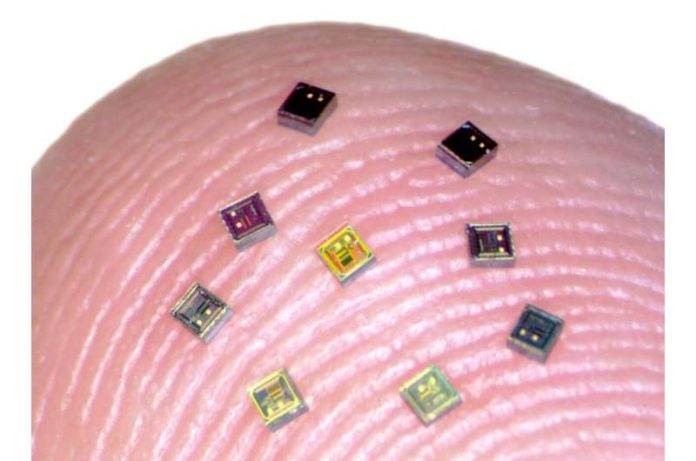 Brain-computer interfaces (BCIs) are direct communication pathways between the brain and an external device. The BCIs acquire signals from the brain, analyze them and translate them into commands. For signal acquisition, these systems rely on implantable sensors that record electrical signals in the brain and use those signals to drive external devices like computers or robotic prosthetics.

Most BCIs use one or two sensors to sample up to a few hundred neurons, but researchers aim to gather data from much larger groups of brain cells. Researchers from Brown University have developed a new concept for a future BCI system that employs a coordinated network of independent, wireless microscale neural sensors, each about the size of a grain of salt, to record and stimulate brain activity. These grain sized microsensors are termed as neurograins. These neurograins independently record the electrical pulses made by firing neurons and send the signals wirelessly to a central hub, which coordinates and processes the signals.

“One of the big challenges in the field of brain-computer interfaces is engineering ways of probing as many points in the brain as possible,” said Arto Nurmikko, a professor in Brown’s School of Engineering and the study’s senior author. “Up to now, most BCIs have been monolithic devices—a bit like little beds of needles. Our team’s idea was to break up that monolith into tiny sensors that could be distributed across the cerebral cortex. That’s what we’ve been able to demonstrate here.”

The device is a thin patch, about the size of a thumb print, that attaches to the scalp outside the skull. It coordinates with neurograins and also supplies power wirelessly to the neurograins, which are designed to operate using a minimal amount of electricity.

“This work was a true multidisciplinary challenge,” said Jihun Lee, a postdoctoral researcher at Brown and the study’s lead author. “We had to bring together expertise in electromagnetics, radio frequency communication, circuit design, fabrication and neuroscience to design and operate the neurograin system.”

“It was a challenging endeavor, as the system demands simultaneous wireless power transfer and networking at the mega-bit-per-second rate, and this has to be accomplished under extremely tight silicon area and power constraints,” said Vincent Leung, an associate professor in the Department of Electrical and Computer Engineering at Baylor. “Our team pushed the envelope for distributed neural implants.”

“Our hope is that we can ultimately develop a system that provides new scientific insights into the brain and new therapies that can help people affected by devastating injuries,” Nurmikko said.

The research appeared in the journal Nature Electronics.