The nanosatellite includes sensors that helps to detect, measure and observe interferences of radio waves around the globe 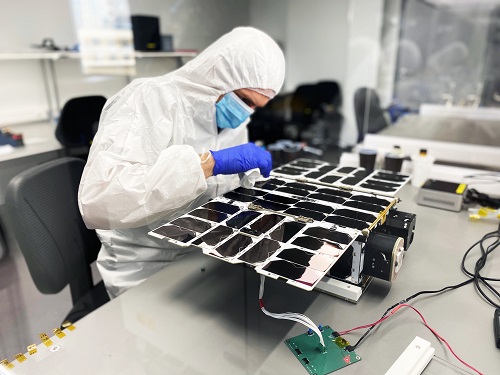 NanoAvionics, a nanosatellite bus manufacturer and mission integrator, has announced that the first of two nanosatellites, built and integrated for radio frequency spectrum and wireless data provider Aurora Insight, will be part of SpaceX’s “Transporter 1” rideshare launch onboard a Falcon 9.

The nanosatellite, nicknamed “Charlie”, forms one-half of the two-satellites and will be responsible for gathering data.

Both 6U nanosatellites are based on NanoAvionics’ standard M6P bus in a higher performance configuration, providing greater technical performance capabilities for Aurora’s radio frequency spectrum mission.

Besides the satellites, with the first demo-satellite launched in 2018, Aurora’s infrastructure includes sensors on vehicles, aircraft, buildings and other objects. The sensors detect, measure and observe interferences of radio waves, providing a comprehensive overview of the wireless spectrum around the world.

Jennifer Alvarez, CEO of Aurora Insight said: “This satellite will give us access to a whole new set of data on the radio frequency spectrum and further our understanding of global wireless infrastructure, enabling organizations to invest, grow, and move forward. NanoAvionics has been an incredibly skilful and cost-effective partner in building the two nanosatellites, integrating the payload and providing launch and operation services.”

Both of NanoAvionics’ 6U nanosatellites are based on its flight-proven M6P bus and include a higher performance configuration to provide more power through deployable panels and the most precise method for pointing and navigation in nanosats by an added star tracker subsystem.

The launch of the second satellite will take place during the first quarter of 2021.