Test and Measurement for LTE Products

LTE offers tremendous opportunities for test equipment vendors. As it is still a rather new technology, market research indicates that service providers prefer to purchase backward- and forward-compatible testing tools for future use, LTE trials or deployments. Since the presence of LTE is only expected to increase with every passing day, T&M players are bracing their services for a variety of challenges and increased activity.

Long-term evolution (LTE) is a standard for wireless communication of high-speed data for mobile phones and data terminals. Based on the GSM/EDGE and UMTS/HSPA network technologies, it increases the capacity and speed using a different radio interface along with core network improvements. This standard was developed by the 3rd Generation Partnership Project and is specified in its Release 8 document series, with further enhancements described in Release 9. The LTE eco-system is steadily building, with several LTE platforms already announced and demonstrated by leading device/chipset manufacturers.

According to market research studies, the global LTE handset sales will increase from 70 million units in 2012 to 150 million by 2013, and LTE subscribers will reach 380 million by 2015. By 2013, operators would have spent over $8.6 billion on LTE base stations infrastructure and LTE will grow faster than 3G.

LTE testing: What to focus on
With any new technology, one of the greatest challenges before production engineers is what to test and why. For LTE, the degree of complexity is unprecedented and testing it all would have devices sitting on the tester all day long.

In production, the basic assumption has to be that the design handed off from engineering meets all the requirements of the customer and, when assembled correctly, will do so consistently. While supporting this assumption places a burden on the engineering team and its processes, without this assurance, the dimension of tests is simply too large to examine all the possibilities with today’s extremely complex devices.

Here are some of the many ways in which LTE testing is different from other testing domains:

3. Bandwidths up to 20 MHz are used by LTE, which requires power amplifier and IQ modulators to have a flat frequency response. Use of higher-order modulation schemes (16QAM and 64QAM) requires a high modulation accuracy even when noise, fading and interferences are present and as such, testing LTE for high performance is a no-brainer.

4. There isn’t any transmit filter definition in LTE, as is the case for 3G technologies. Hencein-channel performance (error vector magnitude) and out-of-channel performance (adjacent channel leakage ratio, spectrum emission mask) requirements need to be met by the design, which necessitates the testing process.

5. Testing multiple use of antennae (MIMO) as part of performance requirements is a must for a system which essentially uses that feature as a differentiator. Transmit diversity and spatial multiplexing (closed-looped and open-loop) are among the most important parameters to be tested. 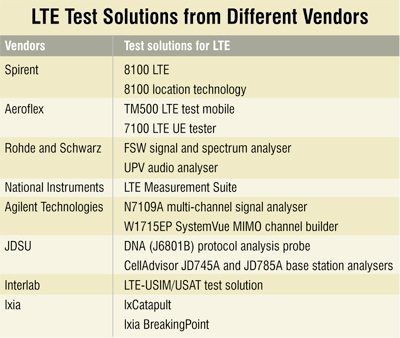 Stephen Hire, general manager, Aeroflex Asia-India, adds, “While each generation of mobile phone technology brings greater benefits to the subscriber, it also adds greater complexity—especially in RF design, protocols and signalling, and battery life. This drives the need for ever more complex test equipment to bring mobile handsets and network equipment to market. Handset and chipset vendors are using our 7100 LTE radio test set and network emulator to optimise battery life and maximise data transfer rates to improve the user experience when browsing the Web or watching video. The larger the network and the greater the number of subscribers, the more important it becomes to squeeze every last drop of performance out of each part of the network.”