Be(a)ware of the Smart Home

Smart homes are great. They are more energy-efficient, safe and comfortable too. But, you need to resist the temptation to micro-manage your home, or it can make you dizzy! Let us set you thinking by telling you a few (mostly nice) things about the emerging smart home -- Janani Gopalakrishnan Vikram

There are many popular mobile-based smarthome solutions today, such as the Samsung Smart Home platform, Canary, Insteon Hub, MobiLinc, Roger Smart Home Monitoring and so on.

Technologies such as NFC and Miracast make it easy to wirelessly connect a mobile phone to the television, home theatre or sound system, and enable users to stream their mobile games to the television or music from the mobile radio to the home speaker systems.

An app that comes to mind at this juncture is NFC Shortcuts, which allows users to launch apps or shortcuts conveniently by tapping a BlackBerry phone to NFC tags. “For example, when you reach home, you can just tap an NFC tag at the entrance and your BlackBerry will turn off the cellular radio, turn on Wi-Fi (home network), turn off Bluetooth (used for hands-free in the car) and even send an SMS to your family members (not at home) notifying them that you are home. You can even tap a tag on your nightstand to set the BlackBerry into bedside mode and tap it again in the morning to take the device out of bedside mode,” explains Mathew. 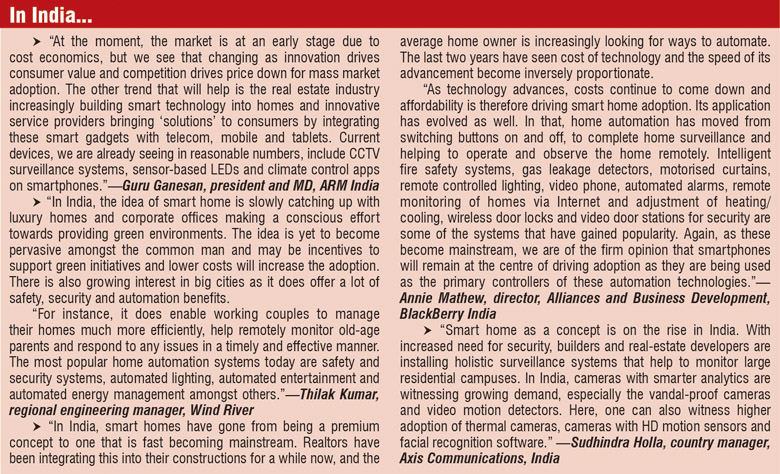 Mobile phones enable the concept of smart home to extend beyond the home too. The SkyPark Café in Hyderabad is an exciting example. The cafe is set up with BlackBerry devices, NFC points and a BlackBerry music gateway to play music to customers in a jukebox style.

In addition to that, PlayBooks are used to browse, work and play on and also double as the menu. There is also a wall dedicated with NFC stickers for customers to easily check-in with NFC-compatible devices. And there are also QR codes that customers scan to avail of freebies as well as an App of the Month offer.

Plus, nowadays there are smartphone apps such as Control4, which integrate all your home automation systems from media, security, lights and thermostats using one easy-to-use interface.

For example, a single ‘goodnight’ button could ensure all your lights are switched off and doors are locked. A ‘cooking’ button could brighten the kitchen lights, switch on the chimney, pre-heat the oven, and play your favourite music on the kitchen speakers! Life becomes even easier.

“Home automation has created opportunities for consumer durables to cross-sell devices and products that are compatible with each other. Smartphones have driven this trend, given that it is today our single view of the world and consumer durable brands are fast adopting capabilities such as NFC and Miracast to ensure that consumers are able to control their homes from their smartphones,” says Mathew.

Do it yourself
Obviously, you know your needs best, and that is the greatest motivation for DIY in the home automation space. A simple web search and you will be overwhelmed by a mind-boggling list of projects in this space. Low-cost microcontrollers and development boards from ARM, Raspberry Pi and Arduino are making it possible for anybody with a slightly technical bent of mind to develop devices by themselves. Add to this the innumerable DIY tutorials on the Web and your life is made!

From stoves that warn you when they are not switched off before you leave the house to saucepans that beep when the milk is about to spill over, from automatic cat feeders to garden sprinklers, the range of made-by-users devices is extremely large today.

While regular DIYers can start with a development board and do it all by themselves, others too can experiment with DIY home automation using kits available in the market today.

Ninja Blocks is an interesting example in this category. It is an open-source home automation system that lets you connect a bunch of sensors to the Internet. It is very easy to connect the sensors to the peripherals and to program them using simple if-this-then-that logic, just like other commercial kits like Belkin’s WeMo. Interestingly, Ninja Blocks also supports WeMo, so you can use it to extend an existing system if you already have one installed.

There are several people who use Arduino or Raspberry Pi based automatic garden watering systems, which employ sensors to keep checking the humidity of the garden soil, automatically turn on the sprinkler when it is too dry and also tweet the user to confirm that the garden has been watered. Some advanced DIY projects even make use of recycled water from the air-conditioner to water the garden! Now, how’s that for DIY home automation—everything is perfect for your needs!

Making them work together
While there are many home automation products available today, it is important that these should be able to connect and interact with each other using a common language. Otherwise, it will be more of a headache than a pleasure managing these disparate systems!

Interoperability, in fact, was one of the significant themes at this year’s CES. Global retailers such as Staples and Lowe’s seem to be making notable strides towards interoperability.

Staples, for example, launched the Zonoff-based Staples Connect system late last year, and in the past few months it has expanded the number of products that work with it. Staples solution comprises a hub that connects to a user’s Internet router, and uses a smartphone app to centrally control thermostats, light bulbs and security systems.

While the basis of the solution is that most smart home systems use common technologies such as Bluetooth, Z-Wave, Zigbee or Wi-Fi to connect, they hope to also include proprietary standards like Lutron’s Clear Connect within the purview of the solution.

Lowe’s also has a similar solution called Iris, developed in partnership with connected-device leaders such as First Alert, Honeywell, Schlage and Whirlpool. Iris comes with Ivee, a voice-activated system to which users can issue vocal commands to control their home.

However, the sad part is that still most devices are not ‘open’ for such interoperability. Even industry leaders like Samsung run their smart home concepts on their own platforms, allowing others to program but yet not interoperate with the devices and platforms.

“While there are open, technology standards such as Wi-Fi, Z-Wave, ZigBee, Bluetooth on which these products are built, there is a lack of official industry standards to provide end-to-end solutions. This presents an interoperability challenge amongst domestic and business automation systems. This is also an issue in terms of market growth as home automation requires open, horizontal platforms, centralised controllers, distributed architecture and IPv6 to endpoints that include security, trust and privacy so that houses can self manage systems and services in a truly integrated manner,” explains Ganesan.

The responsibility, to a large extent, rests with consumers, to choose devices based on interoperable rather than proprietary standards so that it will be easier to manage their smart home.

Many a mickle, but no muckle
All said, a technology is useful only as long as you do not let it run your life. Some industry experts feel that, though connected home technologies are useful, they tend to push users to micro-manage their homes, often leading to frustration.

So, exercise moderation when installing smart home technologies. As far as possible, choose solutions that have an easy user interface, opt for those that are based on standard communications protocols that do not require you to set up any extra infrastructure. Try and integrate those through a smartphone app so that you can manage them using a common interface. Program them in a balanced fashion and resist the temptation to keep checking on your house every ten minutes.

If not, you might need Aura by Withings to monitor and improve your sleep!

- Advertisement -
Previous articleGot Some Waste PCBs? Time To Bring Your Crafty Side Up!
Next articleWearables… Gaming… Televisions: Gadgets Galore at CES 2014