In spite of economic slowdown, the Consumer Electronics Show—held at Las Vegas from 8th to 11th January—attracted a large number of new exhibitors and products. Here is a brief report from EFY’s editor who has been visiting CES regularly since 2007 -- Ramesh Chopra 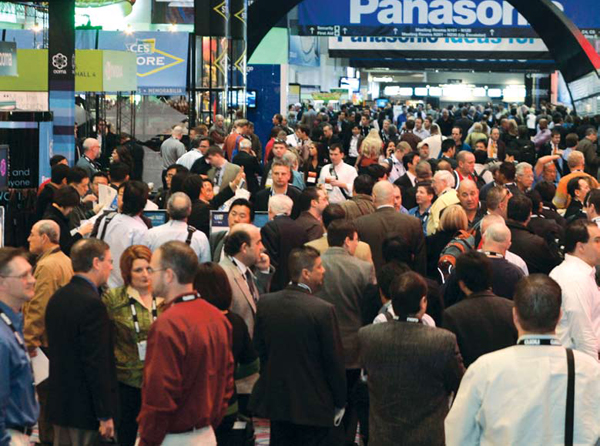 FEBRUARY 2009: All screens and devices seem to be on diet to get slim and trim. In particular, the mobile, the PC and the TV screens—the most important ones in our daily lives. And they are all getting well-connected to each other and the ‘cloud.’ The cloud here refers, of course, to the Internet. This is one of the clear messages I got at this year’s Consumer Electronics Show at Las Vegas in the USA.

You have already seen much slimmer and lighter PCs introduced last year, starting with Mac’s. Preference for thinner TVs is also well-known, although they cost hell of a lot at present for anyone to be able to afford one. I also notice preference for thin, sleek mobile phones when I look around-especially in international forums such as the CES.

Is it due to the global economic downturn that the manufacturers have started saving on the material cost? Of course, not! The reason is to make the devices look better as these become our lifestyle statements. The slim is the ‘in’ thing nowadays. This must have taken a while to register in the US where big was always considered to be better.

Microsoft
In place of Bill Gates, who has been giving keynote address almost regularly at CES, Steve Balmer, Microsoft’s CEO, took the stage this year for the first time to show the shape of things to come from their end. As he disclosed, beta version of ‘Windows 7’ has just been launched worldwide. It can be downloaded from the Internet for checking, according to Steve. He showcased its salient features to the audience.

“There is no turning back from the connected world,” said Steve. No matter what happens with the economy, or how long the recession lasts, the companies that continue to pursue advancement in technology will do much better than those who lag behind, he feels. Microsoft had invested $8 billion in R&D last year alone for this purpose.

“There is so much opportunity ahead of us,” said Steve. First and foremost is the convergence of the three screens that people use every day—the PC, the phone and the TV. Microsoft’s original aim was to put a PC on every desk. Today, a billion people already have PC. But that means there are five billion people who have never owned a PC. So we have a big task ahead of us to make computing more affordable.

There is also the challenge and opportunity for creating anytime, anywhere computing through the convergence of the PC, phone and TV, and their connectivity through the Internet. Soon smart phones will make up 50 per cent of the mobile phone market. Also, we shall soon see TV becoming more sophisticated and more connected, and the boundary between the PC and TV will dissolve.

In the next couple of years, according to Steve, the computer will be able to ‘hear’ and ‘see,’ besides recognising gestures.

Intel
Intel’s chairman Dr Craig Barret chose to speak at length on ‘Small Things Challenge’ (instead of processors) in his keynote address. This project is being run together with Kiva.org to raise money for Save the Children’s programme titled ‘Rewrite the Future.’ The plan is to urge the people world-wide through ‘smallthingschallenge.com’ website to help in development and education of children in emerging countries.

Barret unveiled the third generation of low-cost Classmate PC tablet for use in schools in developing countries. Also, a video was shown to demonstrate how low-cost solutions were being found in India to take education to villages in buses fitted with computers, and to provide healthcare facilities in remote areas using telemedicine techniques.

Barret, however, believes that we shall continue to be surrounded by screens, including the large TV, medium-size computer and small-size hand-held displays, for a long time. Anyone who thinks that there won’t be these three predominant screens or devices in the near future is crazy, according to him.

Sony
Sony’s chief executive Sir Howard Stringer showed a thin, flexible, coloured OLED screen which could be bent. He also showed the audience a couple of short futuristic digital 3D movie clips with the help of sunglasses which had polarised lenses made by RealD.

Since the technology for screening 3D movies is complicated, it is not likely to be available for showing at home theatres. So 3D movies are once again expected to drive the viewers to the theatres for this new kind of realistic experience. Dream-Works Animation’s chief executive Jeffery Katzenberg disclosed that their company had already retooled their studio to make 3D movies, and from this year they would be making 3D movies only.

Stringer pulled out the prototype of a Vaio ‘Lifestyle PC’ from his pocket which he said was as thin as a pack of playing cards and weighed just 640 gm. It has a 20cm (8-inch) display but full capabilities of a standard notebook, unlike the smaller netbooks being offered nowadays, he claimed. Priced much higher at $900 than other netbooks, which are priced at around $400 only, it is a fan-less device which would be available in such bold colours as garnet red and emerald green. It should be in market by February end.

3D HDTV
One of the novelties noticed at CES was the advent of 3D television, which could be viewed without the need of using special eyeglasses. Samsung as well as Panasonic were seen demonstrating their respective 3D TV sets. Of course, the effect was much better when the movie was viewed directly from the front—at least in the Samsung TV personally checked by me.

If 3D TV catches on, it may not be necessary once again to go to cinema halls to watch 3D movies, as expected by Sony’s Howard Stringer. But there is no news on pricing and commercial availability of 3D TV as yet.

Miniaturised
Woo Paik, president and chief technology officer of LG Electronics, introduced their fully functional wristwatch cell phone with 3G video telephony (VT) service and GSM quad-band network capabilities. Though it is a follow-up of the prototype he introduced at CES2008, it includes such upgrades as a touch-screen interface, 3G capabilities and video calling. Its voice recognition features, for use with or without a Bluetooth headset, make call placing and looking up contacts easy. This good-looking, wearable phone will be available in Europe soon this year.