The sun delivers 1.2×105 terawatts of power to the earth, which is about 104 times the rate at which human civilisation currently produces and uses energy. More energy from sunlight strikes in one hour than all the energy consumed by humans in an entire year. In fact, the solar energy resources dwarf all other renewable and fossil-based energy resources combined. Being green, it receives heightened attention as well.

A solar cell is basically a sandwich of semiconductor surrounded by layers of electrodes, which convert the sun’s photons into electrons. Photovoltaic (PV) technology can directly convert solar energy into electrical energy without any emission. 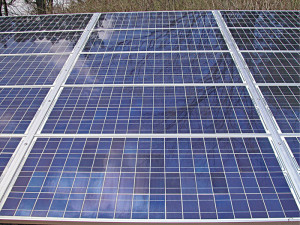 To provide a truly widespread primary energy source, solar energy must be captured, converted and stored in a cost-effective fashion, even if the device operates near the theoretical limit.

The theoretical efficiency limit for even an optimal single-bandgap solar conversion device is 31 per cent. It is because photons having energies lower than the absorption threshold of the active PV material are not absorbed, whereas photons having energies much higher than the bandgap release heat to the lattice of the solid. If all the photons were converted into electricity, the theoretical efficiency limit would have been about 70 per cent.

PV modules shipped for commercial use now have a typical efficiency of 13-15 per cent. The losses are almost entirely due to small reflection, grid shading, heat loss, etc.

At present, the selling price of grid-connected PV electricity is about Rs 20 per kilowatt hour (kWh), whereas utility-scale electric power generation costs about Rs 2.50 per kWh. Hence for solar electricity to be cost-competitive with fossil-based electricity, there must be improvement in efficiency and manufacturing cost must be substantially reduced. If photons having energies greater than the bandgap of the absorbing material do not dissipate their excess energy as heat and instead produce more electrical energy, theoretical efficiency in excess of 60 per cent would be attainable.

Direct and efficient use of solar energy is given high priority to address energy and environmental issues. The United Nations panel foresees big growth in renewable energy. In 2008 the world consumed around 492 exajoules (1018 joules) of energy and renewable energy made up 12.9 per cent of the total. The contribution of direct solar energy was only 0.1 per cent of the total energy consumed. It is estimated that by 2050 the direct solar energy could grow from 2008 level to about 100 exajoules per year. In the quest of green power, dedicated research work during the last decade has provided a new generation of renewable power source technologies at competitive price.

Since the first recognition in 1839, PV technology has achieved tremendous progress. The solar cell efficiency has increased from 2-3 per cent level in the last century to about 46 per cent in a new generation of PV modules developed in 2010, which is commercially viable. However, there is still much effort needed for efficiency improvement and cost reduction.

Some emerging technologies that can considerably improve energy utilisation efficiency include multi-junction cells, optical frequency shifting, multiple-exciton-generation cells, multiple-energy-level cells, hot-carrier cells, concentration PV systems and hybrid PV systems. However, these technologies are comparatively costly. PVs having quantised band structure, such as quantum wells and quantum dots, can theoretically be as efficient as 60 per cent. In fact, lead-selenide (PbSe) quantum dots have demonstrated such effect in laboratories.

Hybrid solar device
For the single-crystalline single-junction silicon (Si) technology, the conversion efficiency is lower than 30 per cent. Thus a large portion of solar energy is wasted through heat dissipation. Recently, a hybrid solar panel integrating PV, thermoelectric (TE) and hot-water (HW) modules has been developed. With this, the waste heat can be recovered appreciably and electricity generated by using the thermoelectric module, thereby augmenting the overall conversion efficiency of the composite system.

The basic unit of a thermoelectric generator is shown in Fig. 1. It consists of two types of thermoelectric elements—p-type and n-type semiconductors made of bismuth telluride or silicon germanium. At one end, both the elements are connected together with a high-conductivity metal enabling electrons to flow from n-type to p-type leg and also to have uniform hot-side temperature. On the cold side, two metallic electrodes are connected to the legs separately forming positive and negative terminals.