In the coming years, as the IoT becomes a larger reality and the demand for reduced power consumption heightens, the model for the next-generation sophisticated analogue and mixed-signal circuits is likely to combine ‘analogue on the edge’—to sense and actuate—with ‘digital at the heart’—to control, make decisions and communicate

The market for analogue and mixed-signal semiconductors is set for some significant evolution over the next few years. The Internet of Things—in which billions of objects (smart or otherwise) will become IP enabled and connected—offers an abundance of opportunities for devices and systems that sense, control, actuate and communicate with the physical and most decidedly analogue world in which we live.

Another important trend that is uppermost in the collective mind of the entire electronics industry is delivering solutions that provide reduced power consumption and increased energy efficiency at the system level. Could the encroachment of digital-processing technology into the esoteric field of analogue chip design provide an answer for each of these strategic trends? 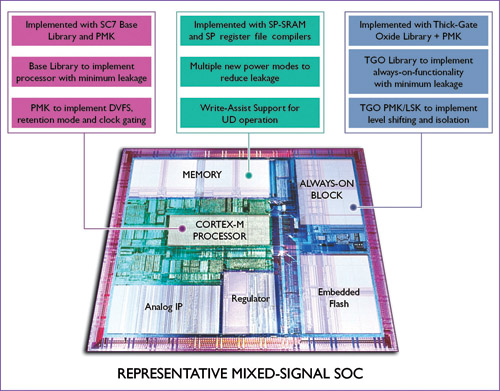 Analogue design is, of course, the proverbial black art and combining it with digital is a highly complex process in advanced mixed-signal designs. Arguably, though, it has become much easier in recent times. One important factor that has eased and sped up the development process is the growing sophistication of the mixed-signal design flow with EDA tools that now allow engineers to design and simulate both the analogue and digital in mixed-signal designs, whilst running C code simultaneously.

Previously, there have always been varying degrees of separation between the design and simulation of analogue and digital circuitry; and when it comes together in a single-chip layout, the design might not always work first time. But increasingly, thanks to these new advanced design tools, the process is now almost instantaneous, rather than taking many extra weeks in development. And when the increasing commercial availability of analogue IP along with digital libraries is added into the mix, this makes it significantly easier and quicker for any analogue or mixed-signal chip vendor to come up with fast and efficient designs in a way that was not possible a few years ago—and certainly for those without huge experience in this field.

Embedding processing capability
These advanced capabilities in the design flow make it increasingly easy to embed a digital processor into an analogue or mixed-signal design. There is no real penalty, for example, with the inclusion of a 32-bit Cortex-M0 processor core in a design. The core can be implemented utilising a minimum of 12,000 logic gates and so it is virtually negligible in size compared to the surrounding analogue circuitry, which is larger perhaps by a factor of 10:1 and therefore any additional cost for increased die area is correspondingly low.

Also, the addition of a digital subsystem brings a significantly improved ability to test the device—a huge benefit that has not been fully recognised to date. A digital processor becomes a flexible engine that can be used to do all types of on-chip tests and calibration in mixed-signal system-on-chip ICs, enabling much easier validation of the analogue electronics. Another advantage is increased system integration and therefore lower overall cost with the end system. The chances are that a stand-alone microcontroller is already used in a customer design alongside an analogue or mixed-signal chip. An analogue chip vendor is now in a much better position to offer a greater level of integration.

Of course, this may or may not actually happen. Some vendors may wish to use the digital processor for on-chip testability, for example, and not necessarily open it up to customers for further feature development. But overall, this is a very clear value proposition for an analogue chip vendor. And, on the other side of the equation, leading digital vendors are seeking to augment their digital-processing portfolio with analogue components.

Improving energy efficiency of the system
Whilst this new and emerging generation of mixed-signal devices has the capability to fulfil the requirements of the Internet of Things, the big point to make is that embedding a digital processor will significantly improve the efficiency and performance of the overall system, representing huge savings in power consumption.

So what can digital do to enhance the capabilities of analogue components to improve system power consumption? One specific and very important example is in motor control, where power electronics and the analogue are absolutely crucial. A digital processor can enable significantly better motor management of speed and/or rotation, delivering a potential saving in power consumption of around 40 per cent. And the motors in this example are large devices in industrial applications, not necessarily those in low-cost consumable products, such as toys. The digital element does not replace or take anything away from the analogue’s side—rather it simply enables digital control to improve the quality of the overall system.