At one point of time, the definition of the internet of things (iot) revolved around radio frequency identification (RFiD) tags and applications monitoring them. Gradually, it has evolved to encompass everyday products such as mobiles, air-conditioners, refrigerators, tvs, heart rate monitors, disks and modems, and even LED lights and power sockets. These products are either internet-enabled or use a smartphone, tablet, or other mobile devices and their applications as a gateway to connect to the Web. In this article, let us take a look at some of the recent consumer electronics products that fit into the iot schema

GPS device that projects routes on the road

Open Sight is a navigational aid for cyclists, developed by designer Kim Tae-Jin. Tae-Jin felt that traditional GPS navigation devices are distracting as people tend to look at the device rather than the road, leading to accidents. So he went about developing this navigation aid, which uses powerful directional laser arrows that are visible even during the day, to project routes and other information straight ahead of the cyclist on the road, rather than on the device. The designer is confiden this will be more convenient than traditional gadgets, and also avoid accidents. 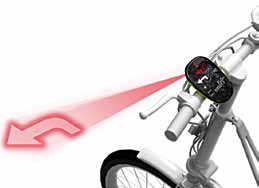 Inside: At the core, Open Sight works like existing GPS devices but includes high-intensity laser projection, which is bright enough to be seen just as well in broad daylight as in low light and at night. The projection mechanism displays the route and other information straight ahead of the cyclist, on the road. So there is no need to keep looking into a small screen. The touch-enabled control panel allows the user to easily control the features. Open Sight also includes a variety of sensors that measure cycling speed, distance covered and so on. The device is pedal-powered, which means it charges using kinetic energy generated by the pedalling motion. It has an on/off switch to avoid power wastage when not in use. In short, the innovation here is the laser projection, which avoids distraction and improves safety for the cyclist. According to the designer’s experiments, it also improves visibility at night, since the laser beams provide additional light.

Don’t know what to cook? Ask your fridge
Imagine a refrigerator that keeps track of the inventory inside and warns you when something inside is getting stale, suggests recipes based on ingredients you have, or reminds you to go shopping when the veggie or milk tray turns dry! Well, Samsung’s new smart refrigerator, the T9000, is capable of this and more. 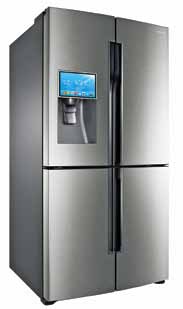 Inside: The Samsung T9000 is about one cubic-metre (32-cubic-foot), four-door fridge that has two compressors, three evaporators and a large number of various sensors. It is Wi-Fi enabled, and includes a 25.4cm (10-inch) LCD touchscreen tablet on the door. The fridge runs on Android OS, and includes apps such as Epicurious and Evernote to help users choose recipes, create shopping lists, and manage expiration dates of items like yogurt and milk. The display may also be used to keep track of news and weather, tweet or even display photo slideshows on the fridge door. The device integrates with Google Calendar, and is capable of syncing with your smartphone or tablet. You can even share recipes, notes and photos with family and friends. The application also makes it easy to set the refrigerator’s temperature and humidity. It extends the capability to change the functionality of one of the fridge’s compartments. By altering the settings you can convert it into a freezer or normal fridge depending on requirements.

Remote control devices using your mobile
Belkin has launched a series of home automation products called WeMo that let you control your home electronics devices from anywhere using a mobile app. They are in line with the ‘connected home’ concept—a key aspect of the IoT. The WeMo Switch, a part of this series, is an intelligent power socket that works with an iOS application. It makes use of your home’s Wi-Fi network to provide wireless control of TVs, lamps, stereos and more. Using mobile Internet, you can also control the devices from anywhere. Simply download the free WeMo app, plug the switch into an outlet in your home and plug any device into the switch. You can turn the device on or off, or even set schedules for its operation. For example, you can program the coffee maker to switch on and brew for 10 minutes just before you arrive home, so you get fresh coffee when you get in! There is also a motion-sensor-based product called WeMo Motion that lets you program devices to work based on the presence or movement of people.