Bangalore, 17th November 2016. —Analog Devices, Inc. and Dell EMC today unveiled a proof of concept (POC) for an Internet of Things (IoT) solution that tracks the health and location of first responders. The POC IoT solution is designed to improve the safety and effectiveness of first responders when involved in an emergency situation, especially those in harsh environments. According to the National Fire Protection Association, more than 60,000 firefighter injuries in North America alone are reported annually, of which 25 percent are as a result of overexertion or strain.

The POC IoT solution tracks the location and vital signs of first responders at all times in or outside of buildings. A smart, wearable sensor-equipped vest is worn by personnel to monitor useful health metrics including breathing rate, breathing volume, and heart rate. A connected boot tracks location and movement. By identifying potential worker health issues immediately and tracking lone workers via these metrics, emergency teams can be healthier, safer, and more efficient. All the relevant vest and boot data are collected by an edge gateway device and relayed via a mobile network to a private, secure cloud. The results from multiple personnel are then displayed on a portal via a dashboard for access by control teams who may be at the emergency site or in a central control location. The data is analyzed to monitor worker health and enable a fast response to ensure their safety. Historical analysis of vital signs over multiple responses safeguards continued welfare of safety personnel.

The POC IoT solution uses INFINITE, an Industrial Internet Consortium (IIC) approved testbed. The INFINITE testbed was developed by Dell Technologies in collaboration with Vodafone and Cork Institute of Technology to enable innovation, insights, and business opportunities for Industrial IoT across a wide range of industries.

“INFINITE encompasses all the significant technologies, domains and platforms to support major advancements in cloud, networks, mobile, wireless, edge gateways, sensors and analytics that are defining IoT globally,” said Donagh Buckley, head of Dell EMC Research Europe. “I am delighted that the testbed has enabled close collaboration between Dell Technologies and Analog Devices to build new IoT solutions quickly, reliably and securely.”
“This POC IoT solution brings together multiple technologies in a unique way and showcases the need for precise and robust measurement in mission-critical applications,” said Jason Lynch, director, IoT Strategy, Analog Devices. “Software algorithms correlate the various data streams using the INFINITE testbed to determine the health and location of workers in real time, and help to ensure critical decisions regarding their safety are made immediately and reliably.” 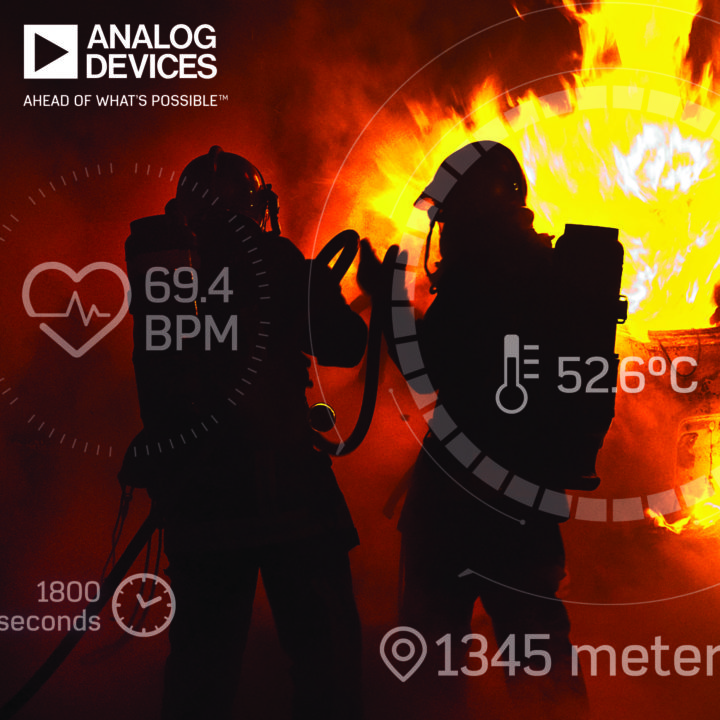 The POC IoT solution’s platform also allows for future integration of a broader range of sensing technologies to adapt to different mission profiles, including incorporation of precision inertial measurement units for dead-reckoning navigation in GPS-denied environments. Analog Devices’ products, such as the ADIS16448 IMU, can augment the existing first responder platform with a fully integrated and calibrated sensor-suite (gyroscopes, accelerometers, magnetometers, and pressure sensor), capable of supporting infrastructure-less navigation in complex extreme environments.

The POC IoT solution uses Hexoskin’s innovative e-textile platform. Earlier this year, Analog Devices announced its collaboration with Hexoskin and Microsoft regarding a unique, wearable IoT solution for athlete and team performance management. This IoT solution allows coaches and team staff to monitor player information such as motion, heart rate, and other useful health and performance metrics from sensor-equipped vests worn by players.

Analog Devices will demonstrate the POC IoT solution for first responders, along with the Hexoskin vest and testbed, in booth #211 at IoT Solutions World Congress in Barcelona October 25-27, 2016.,