Thanks to advanced phosphors, present day LED bulbs produce light that is virtually indistinguishable from that emitted by tungsten filament lamps. In fact, LED technology has advanced to such an extent that these devices can even produce full-spectrum light containing all visible colours in more or less equal proportions. Such balanced spectrum light sources are useful for all lighting applications where there is a need for improved colour rendering. This development highlights the intrinsic superiority of LEDs over thermal light sources which can only generate one type of light. Figure 5 here shows the spectra of commercial LEDs from Electrospell that mimic the light from incandescent lamps (left) and produce full-spectrum white light (right). 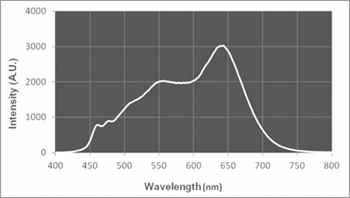 LED lighting is, of course, not limited to just indoor lighting applications. Automotive lighting has also been benefiting from developments in LED technology. Vehicle interiors and dashboards have been illuminated with LEDs for several years and now it is the turn of exterior lights to go solid-state. Parking and running lights as well as brake and reversing lights are now increasingly implemented with high power LEDs. Headlights are next on the cards and indications are that major automobile manufacturers will begin to introduce LED-based headlights by the middle of next year.

Display lighting is yet another area where LEDs are making great inroads. It was six years ago when LED-backlit liquid crystal display (LCD) televisions and computer monitors first appeared on the market and now all flat-screen LCD displays are being made with only LED backlighting. LEDs offer several performance benefits over the older technology of cold cathode fluorescent lamp (CCFL) sources for LCD display backlighting. Their use significantly cuts down on power usage, causes less heating, provides better lighting quality and enables much larger screen sizes than was possible with edge-lit CCFL-based backlights. Furthermore, use of LEDs can also lead to better picture contrast through use of a technique called dynamic dimming where LEDs, directly behind dark scenes, are dimmed in intensity to accentuate the overall contrast. Major TV manufacturers are also competing with each other in bringing out ever thinner TV sets and here too LEDs can provide a helping hand. This is due to their capability to produce customised angular emission patterns that enable the distance between the backlight and the LCD panel to be reduced, resulting in significantly thinner televisions. In order to achieve this, an array of shallow holes is etched on the surface of LEDs, as can be seen in the atomic force microscope image in figure 7. This array forms what is known as a photonic crystal – an ordered periodic structure that is essentially a two-dimensional diffraction grating. The photonic crystal serves two purposes. It modifies the spatial pattern of light exiting the LED and it also makes the LED brighter by extracting more light from deep inside the chip. Both effects are beneficial for LCD backlighting; making TVs both thinner and more power efficient.

An important emerging application of LEDs is in indoor plant growth. Incandescent lamps, previously used for horticultural use, are ill-suited to the purpose as these are extremely inefficient and produce little radiation that is actually used by plants. LEDs provide the ideal solution by providing light at exactly those wavelengths that are efficiently absorbed by plants. In contrast, thermal sources produce most radiation in the yellow-green portion of the visible spectrum which is precisely the light that is reflected rather than absorbed by most plants (this is the reason plants appear green in colour).