This new charge controller IC from Renesas supports large-current rapid charging on a small 25-pin package, allowing rapid charging to be enabled on small communications devices and other portables.

Overcharging and over-voltage are the two most important aspects that determine the longevity of a battery. These are the kind of issues which could reduce performance or lifespan of your battery. It can also prevent from completely draining (deep discharging) a battery, or perform controlled discharges, depending on the battery technology, to protect battery life.

What are charge controllers?
A charge controller limits the rate at which current is added to or drawn from batteries, while also preventing overcharging and over-voltage. Basically, there are two categories which the charge controllers can be divided into. One is Stand-alone charge controllers. They are sold to consumers as separate devices, often in conjunction with solar or wind power generators, for uses such as RV, boat, and off-the-grid home battery storage systems. The other one is Integrated Charge Controller Circuitry that functions as a charge regulator controller and may consist of several electrical components, or may be encapsulated in a single microchip, an integrated circuit (IC) usually called a charge controller IC or charge control IC. Charge controller circuits are used for rechargeable electronic devices such as cell phones, laptop computers, portable audio players, and uninterrupted power supplies, as well as for larger battery systems found in electric vehicles and orbiting space satellites.

The primary function of a charge controller in a stand-alone PV system is to maintain the battery at the highest possible state of charge while protecting it from overcharge by the array and from over-discharge by the loads. Some important functions of battery charge controllers and system controls are 1) Prevent Battery Overcharge: to limit the energy supplied to the battery by the PV array when the battery becomes fully charged. 2) Prevent Battery Over-discharge: to disconnect the battery from electrical loads when the battery reaches low state of charge. 3) Provide Load Control Functions: to automatically connect and disconnect an electrical load at a specified time, for example operating a lighting load from sunset to sunrise.

Key Features of the Renesas’ R2A20057BM Battery Charge Controller IC
One of the most important features is that this battery charge controller IC offers approximately 62 percent reduction in chip surface area compared to earlier Renesas solutions. The use of a very finer high-voltage-tolerance wafer process and wafer-level package (WL-BGA, 25-pin, 0.4 mm pitch) and an integrated 2 MHz high-frequency step-down DC-DC converter enable use of compact multi-layer-chip inductors as the external devices. The 25 V on-chip, high-input voltage-tolerance enables a built-in overvoltage protection circuit and eliminates an external overvoltage protection circuit, contributing to a substantial reduction in the mounting area.

Support for both standalone operation and operation with I2C control. The new R2A20057BM can implement charging operation as a standalone product, or can optionally be controlled through command input via Inter-Integrated Circuit (I2C). The I2C control commands support a wide range of requirements, covering charge start/stop control as well as the ability to change parameter values such as charge control voltage, charging current, and input current limit value.

Built-in automatic load current distribution function. The new R2A20057BM can control the power supply path to the system while the battery is charging using a built-in load current distribution function that prioritizes supply of power to the system and adjusts the charging current when the input current is limited, e.g., when power is being drawn via a USB interface. This eliminates the need to add large external components such as discrete switches when building a charging system. 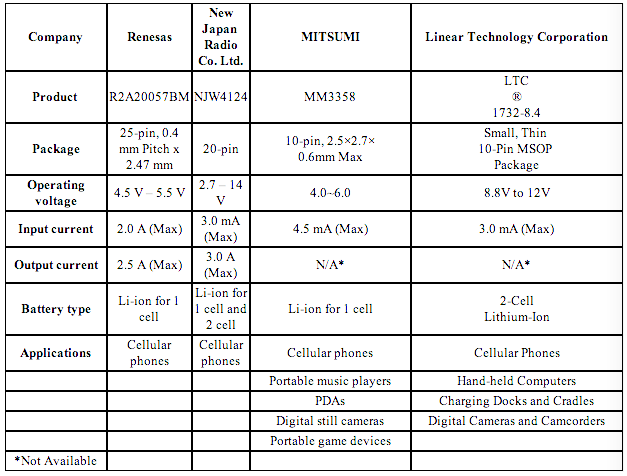 Samples of the R2A20057BM battery charge controller IC are available currently priced at US$4.0 per unit. Mass production of the R2A20057BM devices is scheduled to begin in January 2013 and is expected to reach a scale of 500,000 units per month in August 2013.