Each channel is equipped with its own analog-to-digital converter (ADC), with real-time signal sampling at rates from 1.25 GS/s to 5 GS/s, and scope-like signal conditioning circuitry that allows programming of parameters such as input gain, signal offset and coupling.

The ultra-fast digitizers also offer bandwidth up to 1.5 GHz making them ideal for automated testing applications where wideband electronic signals from DC to the GHz range need to be acquired and analyzed. 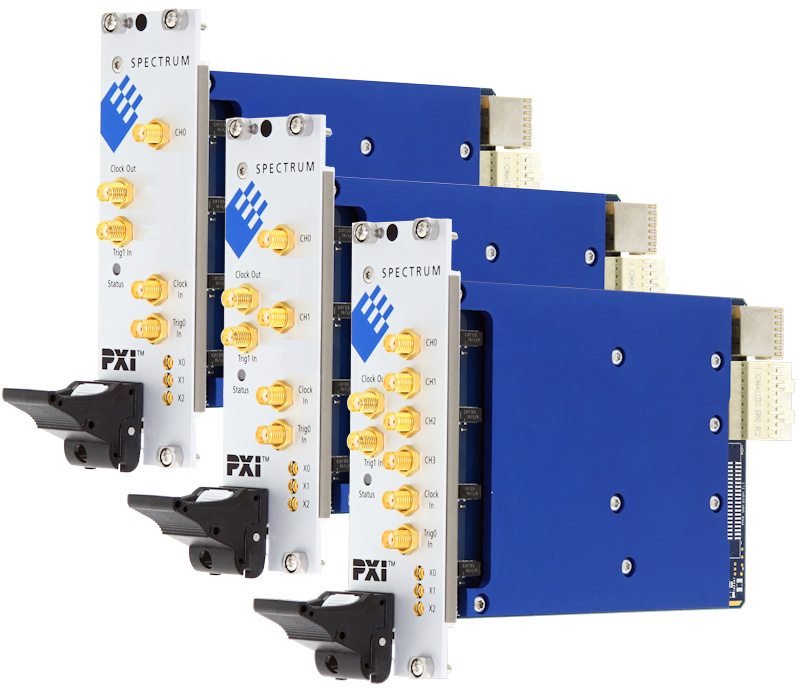 The flexible front-end circuitry of the M4x.22xx series digitizers is complemented by a powerful trigger system, a massive on-board acquisition memory of 4 GSamples and a host of data acquisition and readout modes. The combination makes it simple for the cards to capture even the most complex signals as well work effortlessly with other modules in a test system.

For example, the trigger source can be any of the digitizers input channels, either of the two external trigger inputs, any of the eight PXI trigger lines or the PXI star trigger. Trigger modes include positive or negative edge, both edges (window) and software. In addition, logic triggering can be implemented based on the state of the channel and the external trigger inputs.

Acquisition and readout modes include single-shot capture (for transient recording), FIFO (for streaming data directly over the bus), segmented memory (Multiple Recording), gated acquisition (Gated Sampling) or the combination of segmented acquisition of fast signals in parallel with slow continuous data recording (ABA mode). Trigger events can also be time stamped so that you know exactly when they occurred.