Single-board computers have been revolutionising the way electronics hobbyists, DIYers, students and even professionals looked at their projects. This new board from the makers of the original UDOO board looks very ambitious and powerful -- Anagha P

Since its launch on Kickstarter in April 2013, the UDOO board has been a significant name in the single-board computer (SBC) market. The latest collaboration from AIDILAB and SECO is a cheap, credit card sized board that incorporates the major features of Raspberry Pi and Arduino along with 9-axis motion sensors, and Bluetooth and Wi-Fi connectivity modules. What is more, it runs on Android as well as Linux!

What’s inside
The developers claim that the UDOO Neo board offers the combined performance of a Raspberry Pi, an Arduino, 9-axis motion sensors, a Wi-Fi module and a Bluetooth module. Let us look into the details:

Real-time co-processing: The energy-efficient heterogeneous Freescale i.MX 6SoloX processor is the brain of this single board computer (SBC) and it embeds two cores in the same chip: an ARM Cortex-A9 at 1GHz and a Cortex-M4 at 166MHz. The 9-axis motion sensors, Wi-Fi module and Bluetooth 4.0 module are accessible to both the cores. With the Cortex-A9 core, the user can run both Android and Linux.

Connectivity: There are two modules in the board for Bluetooth / Bluetooth Low Energy (BLE) and Wi-Fi for wireless connectivity to other devices or the network. The Wi-Fi module used is Texas Instruments’ WL1831. The board offers Wi-Fi Direct Smart Config, which means your UDOO Neo board can be connected to another device via a peer-to-peer (P2P) connection, regardless of whether you have a wireless access point or not.

Software platform
One of the most interesting features of this board is its dual operating system support, thanks to the real-time co-processor. The Arduino integrated development environment (IDE) can be run on the Cortex-M processor and the operating system can be swapped between Android and Linux just by switching the SD card on the Cortex-A9 processor. This offers a lot of flexibility to the developers as a person who is familiar with any of these three systems can work on it.

Android: The Android Lollipop version that UDOO Neo supports would be a Vanilla Android, that is, a version without any customisation. This will allow the user to fully customise it. The user can also install Google Apps such as Google Play, Chrome, Google Maps and YouTube on this.
Linux: The kernel is based on the Linux Kernel 3.14. The team is developing a dedicated Ubuntu-based distribution for UDOO Neo. Also, the u-Boot and kernel sources will be released as it is an open source hardware project.

With good connectivity options, it is possible to program UDOO Neo on the cloud or using servers. There are several open source programs available to do this. You can also program the board locally, without staying connected.

Basic versus Plus
UDOO Neo is currently offered on their website in two versions – Basic and Plus. One of the major differences between these is that the Basic model does not come with integrated 9-axis motion sensors. It also lacks the embedded 10/100Mbps Ethernet. While Basic, priced at US$ 49, comes with 512 MB of random access memory (RAM); the US$ 59 Neo Plus has 1 GB.

In all, it sounds like UDOO Neo is worth the hype, so why not give it a try?
The Kickstarter campaign has ended, the product raised the necessary funding and thus will hit the shelves in October. 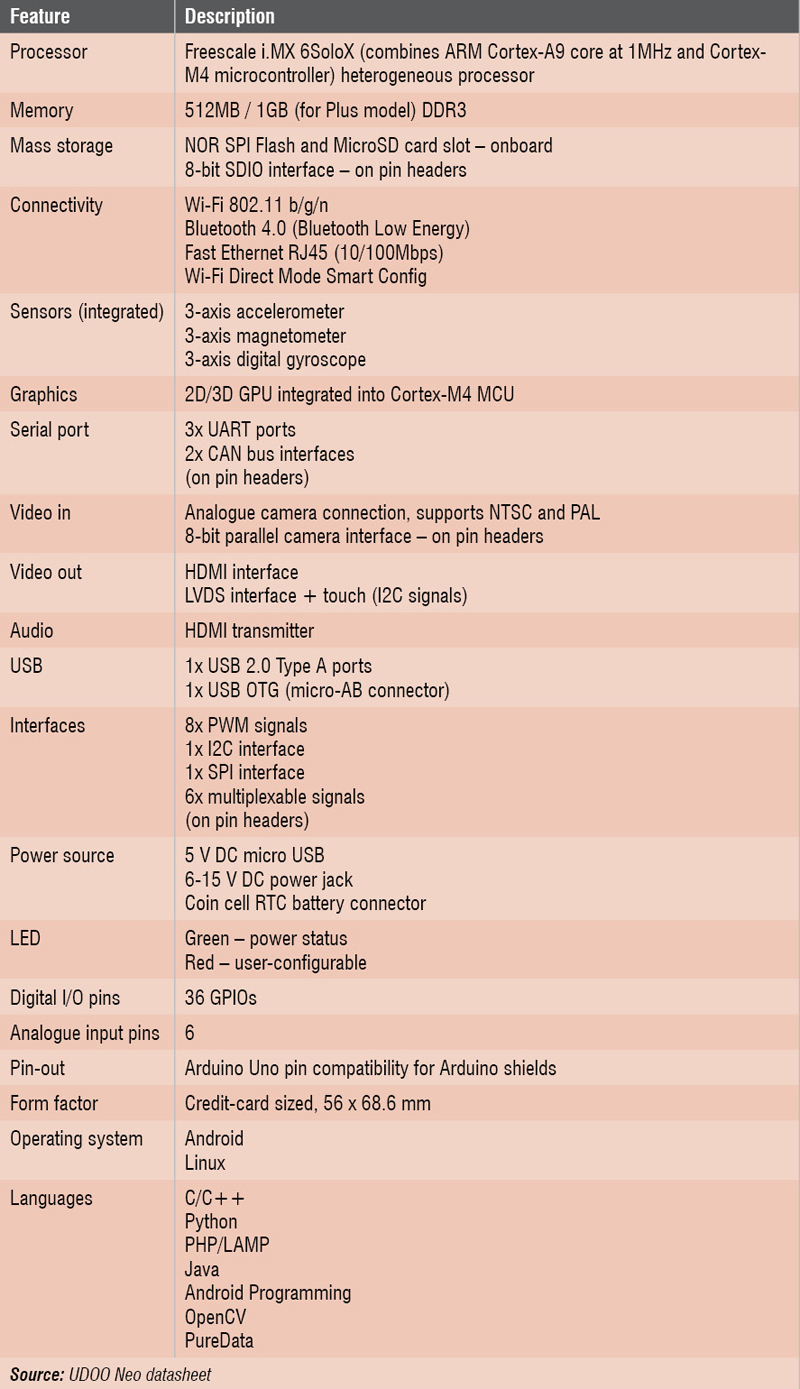