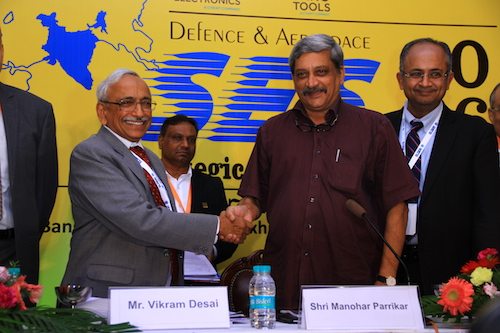 Recognizing Strategic Electronics as a key area where Defence Production Policy and Offset Policies have created immense scope for growth of domestic manufacturing, Electronic Industries Association of India had launched the Strategic Electronics Summit in 2010 to offer a platform for the Indian industry to explore opportunities to work together with the defence establishment, bring all stakeholders including the government, defence organisations, private and public sector together and share information.

Addressing the large industry gathering, Honorable Raksha Mantri Shri Manohar Parikkar said, “The last one year has been an important one. Ever since this government has come into place, defence procurements has grown, old proposals have been taken forward. In today’s dynamic times, we feel RFP’s (request for proposals) cannot be fool proof from day one, they need to be open to changes in the requirements.” 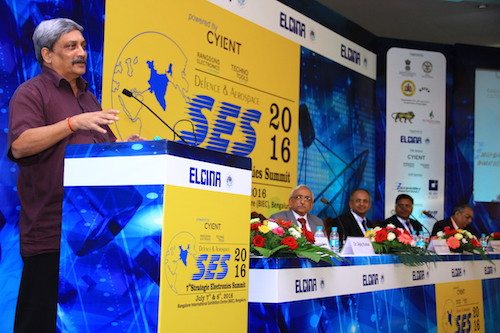 Minister Parikkar further shared, ”One single achievement which is being seen now at our end is that we are changing the mindset of defence personnel with regards to the suppliers. There is a need to stress on being lead integrator than to be a manufacturer of everything.”

“Through the “Make in India” campaign, the government wants to promote the larger Industry and help them develop its design and manufacturing capabilities in India. I urge the industry experts to tell me what needs to be done in a simple format, share your pain points and bottlenecks. The assurance from our end is that the government will support your initiatives to grow and mushroom”, concluded Mr. Parikkar.

Shri Vikram Desai, President ELCINA stated that “The objective of hosting SES is to bring all stakeholders on one platform to enable better communication and understanding of requirements of the defence establishment. We aim to create awareness about opportunities in the Strategic Electronics sector through the interactive sessions planned during this 2 day event which is witnessing growing participation with every passing year”.

Dr. Ajay Kumar, Additional Secretary, Dept of Electronics & IT, Government of India, who has played a key role in the formulation and implementation of the National Policy on Electronics, was optimistic about the future of the Electronic System Design and Manufacturing (ESDM) Industry and the positive impact of the numerous Schemes launched for overall development of the electronics eco-system in the country.

Dr. Kumar said, “The minister’s participation here today is a symbolic message to us all from the industry that the Government of India is full heartedly supporting the Make in India in defence initiative in the country.”

“Relaxation of FDI, increased investments, encouragement to participate more actively in defence requirements where we not only supply to their need but also manufacture for exports has created great enthusiasm amongst us. It’s really heartening that ever since Make in India program has been launched, it has enthused the industry with fresh energy. I can say on behalf of the industry that we are not only committed but are also capable of making a lot of what the Government of India expects. It is noteworthy that we have received 200 investment proposals for electronics manufacturing”, concluded Dr. Kumar.

Secretary General, Rajoo Goel informed that ELCINA was actively conducting research for Defence Electronics sector and had prepared three reports to inform and encourage investments in the country. ELCINA was also working with BEL and DeitY to try and establish a Defence Electronics Lab in Bangalore in BEL Ancillary complex to support the Small and Medium enterprises. This would be a one of a kind project for the industry, he said.

Some of the highlight sessions during the course of the 2 days would be topics such as Opportunities for Defence Industries under “Make in India Program”, Indigenization, Role of Academia & Electronic SME’s Clusters, Strategic Partners for Defence & Aerospace Programs to name a few.

The sessions would be chaired by current and former dignitaries from Ministry of Defence, Dept. of Electronics, Govt of India, C-DOT, DRDO, DEAL, HAL, BEL, and IIT Madras.

SES is a timely initiative as government has made its intention amply clear to enhance domestic value addition in this sector by active participation and investments by foreign as well as domestic companies. The role of Indian Companies & MNC’s is vital to achieve this objective and one of the goals of SES is to encourage the same by Policy advocacy and enabling closer cooperation between Indian and Foreign companies.