Researchers suggested that Cesium Iodide can improve the stability and efficiency of perovskite solar cells.

The researchers alternately deposited thin layers of MAPbI3 and CsI atoms from Cs migrate and become intercalated into the crystal lattice. “Our approach allowed us to produce layers with precise control over the CsI intercalation,” said researcher Tetsuya Taima. 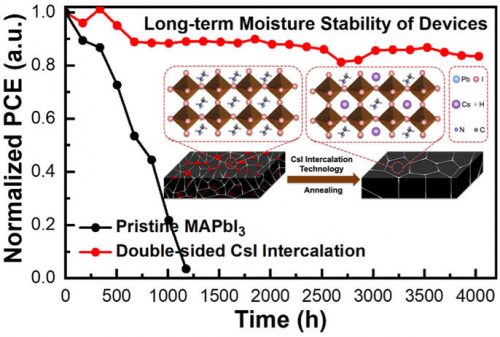 Using this precise control, different cesium based perovskite crystals were created. One, with what the team described as a “double layer CsI layer” has power conversion efficiency as high as 18.43% and far increased moisture resistance. When stored under dark at 40–50% relative humidity for >4000 hours, it retained over 83% of its initial efficiency, according to a paper published in Science Direct.

“The researchers hypothesize that the intercalation of cesium reduces the spacing between the atomic planes, so that moisture from the air cannot intrude as easily,” according to the university. “Also, the surfaces become smoother, which allows charges to reach the electrodes.”

The researchers believe that this approach will pave the road for more efficient and stable perovskite solar cells.