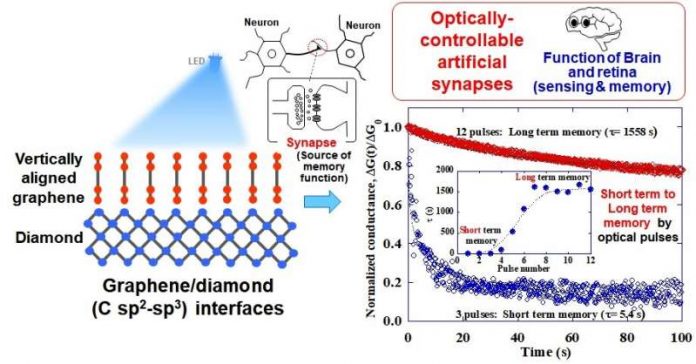 Researchers developed graphene-diamond junctions that can mimic the characteristics of biological synapses and key memory functions.

For implementing high performance computing devices, we don’t need to look anywhere else other than our brains. Neurons of our brain can do complex logical processes at an extremely fast rate. This can be the basis for highly efficient computing devices. Researchers have tried to build “neuromorphic” architectures that mimic the neural network in the brain.

A phenomenon essential for memory and learning is synaptic plasticity, the ability of synapses (neuronal links) to adapt in response to an increased or decreased activity. The researchers have tried to create a similar effect with resistors and memristors (devices whose resistance can be stored). Recently developed photomemristors can detect light and provide a non-volatile memory, paving the road for new material that mimics these synapses.

Researchers from the Nagoya University have developed graphene-diamond junctions that can mimic the characteristics of biological synapses and key memory functions. The researchers demonstrated optoelectronically controlled synaptic functions using junctions between vertically aligned graphene (VG) and diamond. Their work was published in the journal Carbon.

Dr. Kenji Ueda, who led the research team, explains, “Our brains are well-equipped to sieve through the information available and store what’s important. We tried something similar with our VG-diamond arrays, which emulate the human brain when exposed to optical stimuli.” He adds, “This study was triggered due to a discovery in 2016, when we found a large optically induced conductivity change in graphene-diamond junctions.”