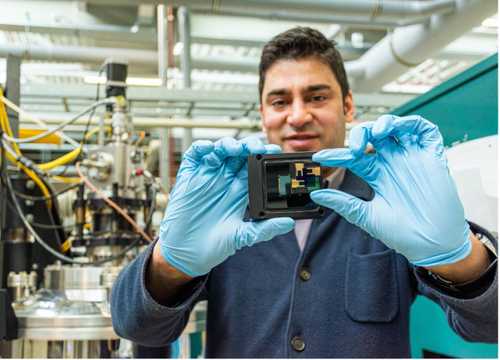 Tandem technology offers an attractive way to increase the efficiency of commercial solar cells and modules. Four terminal tandem solar cells allow the implementation of solar cells based on the industry standards. They are very beneficial in combination with bifacial tandems (tandem solar cells that can produce electrical energy when illuminated on both its surfaces), and can readily achieve a total power generation density as high as 320 W/m².

The researchers from Imec, Solliance, TNO and the Eindhoven University of Technology have combined a four terminal tandem configuration with an efficient Panasonic crystalline silicon (c-Si) cell, demonstrating the power conversion efficiency of 28.7%.

The lab scale perovskite solar cell has a size of 9 mm^2.

“This performance was achieved by tuning the opto-electrical properties of the perovskite solar cell to better match the optical properties of the bottom cell.” says Dr. Dong Zhang of TNO/Solliance. “Next, we determined the loss factors in the four terminal configuration and minimized these step by step.  Finally, we optimized the light management of the complete tandem device, in other words, we maximized light absorption in the tandem solar cell.”