Robot Mules, Birds and Snakes Helping on the Warfront

From drones and other surveillance bots, to robotic surgeons and payload carriers, robots are lending a helping hand to military forces in many countries. But it will be long, or never, before these replace man on the warfront. After all, they have neither heart and mind, nor any reason to fight -- Janani Gopalakrishnan Vikram

The company believes that First-Look will be an important tool for war-fighters and first responders. The machine is equipped with four built-in cameras and two-way audio communication. It also has digital mesh networking capabilities, allowing multiple robots to relay radio communications over greater distances. The device uses a wrist-mounted, touch-screen operator control unit with an inbuilt radio.

iRobot, in fact, has a large range of products being used in war, including the 510 PackBot, small unmanned ground vehicle (SUGV), 710 Warrior and the Negotiator.

“SUGV is a tactile mobile robot that gathers situational awareness in dangerous conditions for war-fighters and public safety professionals. It is lightweight and can operate in a variety of conditions and weathers, as well as on rough terrain and in urban settings, hence commonly used for surveillance or reconnaissance, bomb disposal, explosive detection and inspections,” explains N.H. Shekhar, who is pursuing an MS in information science at the Northeastern University, Boston, US. Shekhar worked as a teaching assistant for the robotic science and systems course under Prof. Marsette Vona, helping to build around ten prototype robots with local and global mapping capabilities.

iRobot also has 1KA Seaglider UUV having a depth range of 50-1000 metres. It can measure temperature, salinity and other parameters, and send this data back to receiving units using global satellite telemetry. This tool is now being used by the US Navy, government agencies and other research organisations. 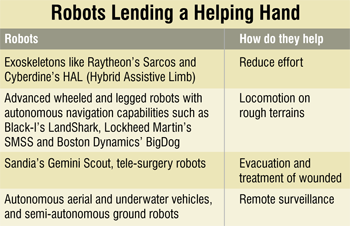 “The advantages and disadvantages of both manned and unmanned robots are very much related to the advancement in robotics, vision and artificial intelligence technologies. It may take one or two decades for robots to search, identify and track enemy forces and make decisions to call in and coordinate strikes from unmanned land vehicles, pilot-less aircrafts and underwater vehicles in a fully autonomous way. Until then, these systems would assist soldiers in warfare to lighten their loads, keep them better informed and perform strikes through remote operation,” says Jayakrishnan.

However, there is a new technology that takes a middle path—exoskeletons. Here, a human inside the robot combines the intelligence of the person with the strength of the exoskeleton. Raytheon’s Sarcos XOS exoskeleton arms and legs are one of the most well-known models for use in the military. The design weighs 68 kg and allows the wearer to lift 90 kg without any special effort. XOS 2 is a recent model featuring more fluid movement, increased power output and decreased power input.

Berkeley Bionics/Lockheed Martin HULC (human universal load carrier) legs are a key contender to XOS. The carrier weighs only 24 kg and allows the user to carry up to 91 kg on a backpack attached to the exoskeleton independent of the user.

Surveillance bots gaining popularity
Surveillance from a defence perspective mainly involves operating from a stable and reliable platform, camouflaging and information gathering with the help of sensors and vision systems.

Jayakrishnan explains that stealth or low-observable technology has been used for long for being invisible from radars. Apart from traditional camouflaging patterns, digital camouflaging techniques are also widely used to dress-up battlefield vehicles and equipment nowadays. New technologies such as adaptive camouflaging have been developed using nanotechnology. For UGVs, the vision system or smart codec can monitor an area for intruders and alert commanders when an event is detected.

Today, there are many advanced UGVs, UUVs and UAVs being used in surveillance platforms. Of late, drones are highly discussed in the news and have actually served to bring defence robotics into the limelight. The Stalker (a product of Lockheed Martin) is a stealthy aerial drone that was used by US Special Forces in Afghanistan. It weighs 6 kg, has a three-metre wingspan and is launched by hand. These drones are designed to be quiet with a ‘hush drive’ that combines a silenced electric motor and a special propeller. The Stalker is said to be inaudible beyond 80 metres and can fly at night with the help of infrared sensors and low-light cameras.

An Indigenous RF Power Amplifier By IIT Roorkee And DRDO