Sensors for Industrial Automation: ‘A Choice to Make’

What is the first thing that comes to your mind when you hear the word ‘sensor’? It would most likely be the sense organs that we have- eyes, nose, ears, tongue and skin. These are the natural sensors that we have. Based on the sensory organs, if we define sensor, then we can say that it 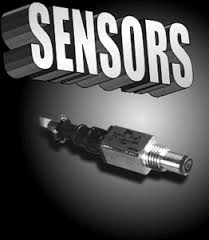 is a device that allows us to sense objects around us, to see them, to smell the odor, to taste eatables, to feel the environment, etc. However, in general terms, a sensor can be defined as a device that detects, measures and converts a physical quantity into a signal that can be read by an observer or an instrument. A sensor allows us to notice things and understand them easily.

The sense organs that we have are considered to be Natural sensors and based on these sensors, we have many man-made or artificial sensors that allow us to make our life easy day by day. The artificial sensors are hardware components that can allow a device to know its location, surroundings and many more things. These can be either wired or wireless.

Sensors in Industrial Automation
In the industrial automation section, sensors play a very important role to make the products intelligent and highly automatic. These allow one to detect, analyze, measure and process various changes like change in position, length, height, appearance and displacement that occurs in the production sites. These sensors also play an important role in predicting and preventing many future events, thus, catering to the needs of many sensing applications. The following are the various types of sensors used in industrial automation: Proximity sensors, Vision sensors, Ultrasonic sensors, Position sensors, Photoelectric sensors, Temperature sensors, Inclination sensors, etc.

Let us discuss these sensors in detail to determine their features and to understand their scope of use.

Linear Position Sensor: This plays an important role in the automation control, where accurate (precision) positioning is required. It measures the linear position of a device. A very good example of this type of sensor is the Linear variable differential transformer (also known as LVDT). It is a type of transformer that is used to sense and measure linear displacement. 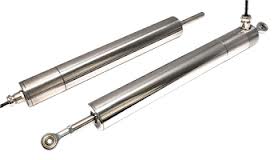 Angular Position Sensor: This sensor often referred to as a rotary sensor calculates the orientation of an object with respect to a specific reference position as has been expressed by the amount of rotation necessary to change from one rotation to the other about a specific axis. It measures the relation established by any position with respect to any other position. These are used, where long term reliability is required. 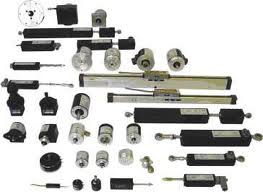 Whereas based on the sensing principles used, the position sensors can be classified into different categories.

Potentiometric position sensors: These use resistive effect as the sensing principle. It is wear-free as these do not have any contacting parts. In these types of sensors, the position marker is attached to the moving part of the application, whose position needs to be measured. The sensing element is a resistive or a conductive track, where a wiper (for example) is attached to the part of the device, whose displacement has to be measured. The wiper remains in contact with the track. As the device moves, the wiper also moves and the resistance between one end point of the track and the wiper changes. This makes resistance a function of the wiper position. In this, the change in resistance per unit change in wiper position is linear. The ease to use these sensors makes them advantageous.

Applications
The applications for position sensors as a whole are broad. They can be used in anything from motion control of a robot, tank-level sensing or even in semiconductor process equipment. 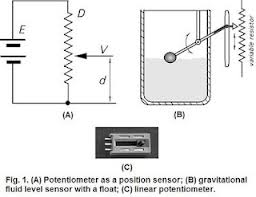 Capacitive displacement sensors: These are based on the principle of ideal plate type capacitors, where the moving object is attached to the dielectric or to the plates of the capacitor to generate the changes in the capacitance. These are the devices that are capable of high resolution measurement of the position or the change of position of any conductive target. These can also measure the density or the thickness of non-conductive material. These types of sensors are found in manufacturing and machining facilities all around the world.

Application
It is used in the precision positioning of objects at the nanometer level and in the measurement of precision thickness of disk drives, assembly line testing and machine tool metrology. It is widely used in machining. 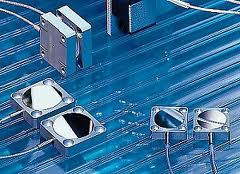 Linear variable differential transformer (LVDT): Popularly known as differential transformer is an electromagnetic device that produces an electrical voltage, which is proportional to the displacement of a movable magnetic core. It is used to measure the linear displacement of the device. These are robust and frictionless. It operates on the principle of electromagnetic coupling and thus, can measure even the infinitesimally small changes in the core. The electromagnetic coupling refers to the transfer of modulated data from one part of the system to the other due to the electric and the magnetic field between them. It is frictionless and can work under high shock and vibration levels.