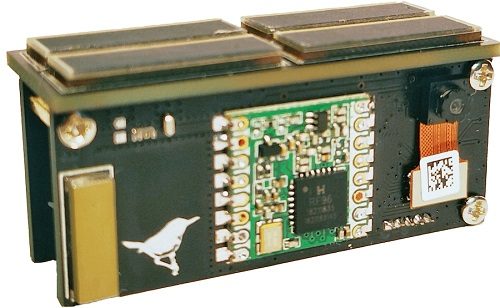 Imagine a small device looking out at a parking lot to check the number of spaces that are occupied, detect traffic jams on busy roads or stay alert to avoid dangerous situations happening in public places.

Now researchers at the Carnegie Mellon University in collaboration with the University of Trento, Italy have come up with such a device called Camaroptera, after a tiny, energetic bird.

Camaroptera is a batteryless remote image sensor that is powered entirely using solar panels. The device is capable of wirelessly transmitting images over several kilometres – even in a crowded city landscape. The way Camaroptera works is by collecting images and processing them with the help of edge computing. Camaroptera then applies machine learning to the images. Based on the machine learning results, the device can then transmit the desired images while disregarding uninteresting data (images), thus saving energy that would have been spent in sending all of them.

“The magic of Camaroptera is that it can operate independently and over large geographic areas. The device can collect images in remote areas and then process the images locally,” said Brandon Lucia, assistant professor of electrical and computer engineering, Carnegie Mellon University. “One of the benefits of doing computation locally is that it avoids using the radio. From an energy perspective, it’s very expensive to use the radio.”

In order to judiciously spend the energy required for collection, computation and transmission of data, along with energy harvestation, Brandon Lucia and team created a new algorithm and system for scheduling how the device can use its time and energy.

Firstly, the device must ensure that every application has its needs met on time and secondly, the device must never run out of energy. For instance, on a cloudy day, it would be difficult for the device to harvest solar energy. As a result, it wouldn’t have enough energy to complete the assigned tasks. However, the scheduling algorithm can correct that so instead of performing a complex energy-intensive task, the device can perform a lower energy-consuming one, saving enough energy for later use.

“If you can’t meet the original specification for what the system is supposed to do, you can do something that remains useful under the limited amount of resources that are available,” Lucia said. “The device gets worse in a predictable and controlled way.”

Besides being energy conscious and based on renewable technology, another benefit of the Camaroptera is that it is less expensive as compared to a traditional device that performs the same function. The device is cheap to build, deploy and maintain.

“If you were going to use this to monitor civil infrastructure, it’d be really cheap because you could manufacture them in large quantities,” Lucia said. “An important benefit of energy-harvesting is the elimination of the device maintenance cost. We can’t have someone driving around replacing 100,000 batteries in cameras all over town once a year.”