Several initiatives have been taken to improve the performance of memories. The aim is to achieve decreased memory power, terabyte per second memory speed, and hybrid DRAM, flash and CPU module architectures to speed up in-memory operations significantly.

We often come across problems with the hardware of our phones, tablets and laptops. These problems could be related to storage or the time it takes to access information. One of the new play areas of smartphones is artificial intelligence (AI), which requires faster and more memories.

3D XPoint technology is a new class of non-volatile memory (NVM) that can help turn immense amounts of data into valuable information in real time. It has about 1000 times lower latency and exponentially greater endurance than NAND. It can deliver game-changing performance for transactional workloads and big data applications.

Due to data explosion, 3D memories technology is a big innovation. Cross-point architecture means that there are vertically-placed conductors that can connect 128 billion densely-packed memory cells in a very short space. This compact structure results in an astoundingly high level of performance and density. New technologies such as JBOF (just a bunch of flash) and JBOD (just a bunch of disks) are a boon for enterprise-level usage, especially in data centres, where more efficient flash and drives are required.

Sambit Sengupta, associate director – field applications, Avnet India, says, “For some mission-critical applications, field programmable gate arrays (FPGAs) can be used to leverage new technologies such as an automated processor, where memory forms the basis of the processing engine. So, the role of a co-processor along with an FPGA can be utilised efficiently. The memory sits inside the dual in-line memory module (DIMM), making the memory integrated with the co-processor.

“In the future, most applications will require sensors and embedded processors to be in always-on mode, or be able to go live in a very short time to take care of power requirements. Such applications will require high-speed serial NOR flash. We support customer designs with partners like International Space Science Institute and Micron for these technologies. Many new consumer applications and daily-use technology enablers already use low power double data rate (LPDDR) devices, embedded multimedia controllers (eMMCs) and multi-chip package (MCP) memories.”

Here, when you connect two or three drives in the system simultaneously, together these act as one large-volume fast drive. It is set up as one system drive and duplicates the data for real-time backup.

DIMM is an emerging memory technology that uses NAND flash chips (NVM) in standard cards to directly connect to memory slots. This solves the problem of power loss, but also reduces system performance. Flash is slower at reading and writing data than DRAM.

Dynamic RAM (DRAM)-based system memory, used for active computing, loses its data when the power goes away. As the use of in-memory database system (to keep data in active memory) increases for rapid processing, developers must ensure that data is retained even after power loss.

This changes the phase of a special kind of glass (Ge2Sb2Te5) within the bit cell. It heats up when a programming current flows through the cell. A higher heating current that is removed early causes the glass to solidify into an amorphous, non-conductive state. Slow heating at a lower initial temperature solidifies the glass in a conductive crystalline structure. Writing of a bit from a one to zero of a PCM product, such as 3D XPoint, is handled by electronically flipping the resistance of the individual cell. This makes PCM much faster than NAND flash, and it is non-volatile like flash.

The revolutionary new-generation memory technology, 3D XPoint is a solid-state drive (SSD) that provides high speed in accessing memory. It is a combination of RAM and flash storage, so it is four times denser than traditional RAM. It is a non-volatile form of memory. 3D XPoint is almost 1000 times faster at reading and writing information than NAND and DRAM.

This technology is a unique combination of Intel 3D XPoint memory media with Intel-built advanced system memory controller, software IP and interface hardware. Together, these present new computer architecture opportunities and computing possibilities for the market.

It stores information in the magnetic states of tiny magnetic elements, or nanomagnets, less than 100 nanometres across. STT-MRAM devices use electric current to read and write data. The technology offers high density, high speed and energy-efficient memory that is non-volatile. With STT, programming current flows through the magnet rather than through write lines adjacent to the bit.

This is essentially a few terabytes of flash or similar storage mounted on a DIMM. Because it is on a fast bus and uses memory IO methods, NVDIMM is four times faster than the fastest SSD. It creates a journal file of write transactions and maintains an image of the data in-memory, without affecting operations. 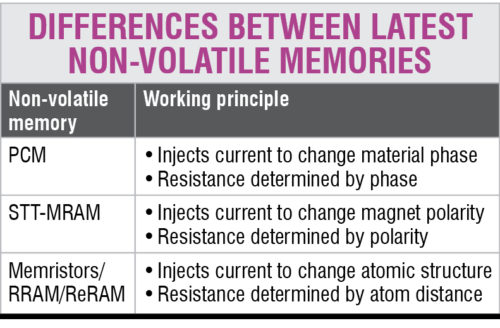 In-memory processing infrastructure is evolving rapidly. And, the most interesting potential changes are for NVDIMM and CPU architectures. For example, Intel’s Optane technology has byte addressability. This enables it to write a single byte to Optane memory with a CPU register using memory command. It first creates a block in the app and then goes through the storage stack software. Finally, it transmits a minimum of 4kB with a single CPU operation. This complete process takes one or two machine cycles.

Network bandwidth and local storage are the key bottlenecks in big data environments. The solution is data compression, where compression ratio depends on data—typically, it reduces up to five times.

Another method is to increase DRAM capacity and performance with a much tighter coupling of CPU and memory. Several initiatives have been taken based on hybrid memory cube concept to improve the performance of memories. The aim is to achieve decreased memory power, terabyte per second memory speed, and hybrid DRAM, flash and CPU module architectures to speed up in-memory operations significantly.

For advanced memory storage, ReRAM can be used for applications such as image recognition and AI.

NVM, PCM, STTRAM, ReRAM and 3D XPoint have a larger capacity, higher latency, higher dynamic power and lower endurance. 3D, JBOF and JBOD technologies are also revolutionising memories. The main memory system must scale in technology, cost, efficiency, size and management algorithms to maintain performance growth and technology-scaling benefits. Decisions of which technology to use must be based on the required performance and total cost of the system.