It’s that time of the year again, with NIWeek 2017 rolling in full momentum. This year’s event is also the first one since Dr. James Truchard (Dr. T) stepped down from CEO to remain as Chairman. Nevertheless, I’ve got to say that the NI team has definitely stepped up to join forces to try and make up for the difference.

In Sync With the Times 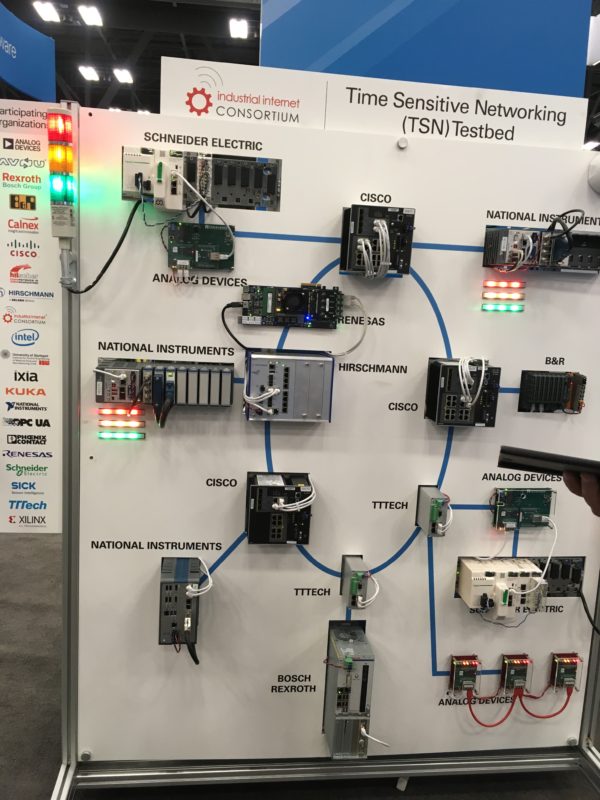 One really interesting update is that NI (National Instruments) has now integrated Time Sensitive Networking (TSN) into the CompactDAQ Platform. TSN syncs through Ethernet, and while the technology is certainly interesting enough, it is the implications of this technology that are really noteworthy.

Previously, engineers needed to manually synchronise using extra cables or UDP (User Datagram Protocol). The flip side of this was that UDP packets getting dropped will affect the sync, thus affecting the system adversely. TSN is immune to this. What’s more is that TSN is more immune to signal interference. Time sensitive networking is a set of IEEE 802.1 standards (Qbu, Qcc, As), and the implementations at NIWeek used Cisco switches to implement them.

Co-existence is Key, Even With Technology

WiFi and LTE co-existence was one of the themes for a demonstration on the expo floor at NI Week this time around. What’s more interesting is that learnings from this can be applied to 6G when it comes around. This is definitely good since the converging dimensions of 5G, Industrial Internet of things, Semiconductor technology and autonomous driving will surely benefit from this.

The other remarkable trend is that almost a decade ago, teams started working on LTE as a study item (around 2005). It later became a work item in 2011 — taking 6 years for implementation. That pace has definitely picked up, and we expect 5G to be implemented much quicker.

What’s to know about 5G?

5G is not being designed as a standalone network this time around, but as a much more integrated solution. It is literally being looked at as a add-on technology that can be integrated to existing infrastructure. This means that network operators won’t have to invest even more insane amounts of money into their networks to keep up with the technology that their users want on tap.

Yes, so one interesting viewpoint that I picked up from a speaker is that the “Internet of Things” is being used for so many things that it has almost become a meaningless word. From consumer electronics and toys, all the way to complex industrial systems are being tagged with the same term. The suggestion is to divide it into consumer, industrial, and analytics at least.

“System” was the other word that kept having it’s meaning changed depending on whom you were speaking with. For some engineers, a system is a chip. For some, it is a wireless or embedded device. For others, it was something like a HyperLoop system.

“Autonomous cars”, was the other target — and with good reason. It was likened to calling cars as horse-less carriages. What’s a better term? Carbots. Short and sweet.