Towards Transient Electronics And The Need For It

Electronic devices are built to last. But now their lifespans can be controlled, courtesy burgeoning research into transient electronics, or devices that are meant to serve a specific function before completely dissolving into their environment over a predetermined span of weeks, months or even years. Moreover, with a degrading environment where electronic waste also plays a major role, the need for such electronic devices that can be disposed of when we want increases.

The generation of heaps of electronic waste around us is compelling scientists to look towards the development of devices that will dissolve either on command or with time.

From medicine to military, transient electronics has many potential applications, specially where sensitive data is used. Applications include military electronic equipment, credit cards, passports and any application in which the electronic device is to be used for a defined period of time, for example, bioelectronics, implantable electronics, environmental monitoring applications and so on.

Millions of patients have benefited from the innovative development of medical electronic devices such as pacemakers or medicine-dispensing agents implanted in the body for either diagnostic or therapeutic benefits. While many such devices have revolutionised modern medicine, these often outlive their purpose in the body and require surgical removal to avoid complication.

But rather than surgery, what if these could simply disappear? That is the concept behind transient electronics. Transient electronics offers robust performance compared to current devices but fully resorbs into the environment after appropriate time—ranging from minutes to years, depending on the application.

To explore these possibilities, scientists have been working with an array of natural materials to test how well these perform in electronic devices and whether these would cause side effects or damage when implanted. One day it may transform the consumer electronics industry, but researchers are currently more interested in the devices’ potential for medical care through implantable sensors or drug dispensers, as well as military exploits and environmental monitoring. Research into such devices has made rapid progress; preliminary versions of vanishing electronics might be available within the next few years.

Medical implants that are only needed for a few weeks could just disappear thereafter, without requiring extra surgery to remove these from the body. And, no one would have to retrieve dozens of transient water-quality sensors from a river undergoing water-quality monitoring. The electronics would dissolve without a trace and without harm to the environment.

Scientists have made key advances towards practical uses of a new genre of tiny, biocompatible electronic devices that could be implanted into the body to relieve pain or battle infection for a specific period of time and then dissolve harmlessly. The medical device, once its job is done, could harmlessly melt away inside the body.

Researchers are conducting further studies, centred around degradable polymer based materials that would make suitable platforms for other electronic components, including work on transient LED transistor technology. They have produced a blue LED mounted on a polymer base with electrical leads embedded on it. When it comes into contact with a drop of water, the base and leads begin to dissolve and the light goes out.

A lost credit card could vanish from existence (but most likely still leave debt behind), a secret diary could be programmed to self-destruct, should it be removed from its hiding spot, and sensors stored with food could indicate when it has reached temperatures that would cause the food to spoil. 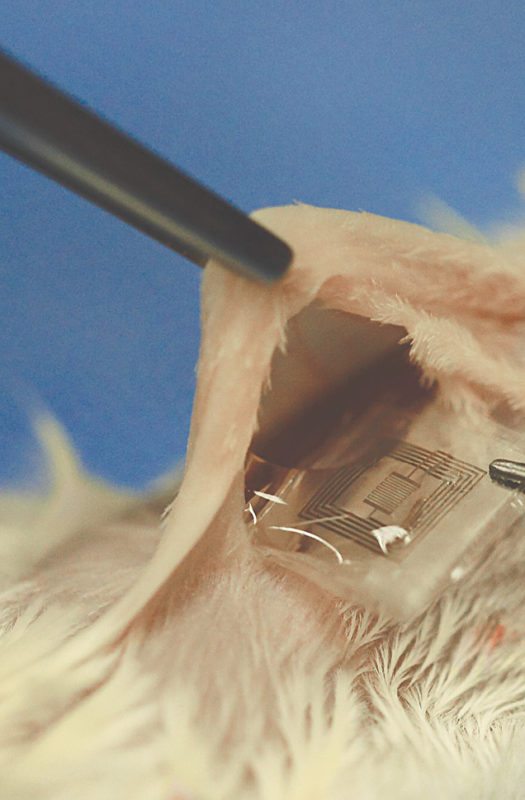 The real-world application for transient electronics is, perhaps, in the field of military espionage. Should a spy or informer carrying sensitive information be captured, injured or worse, the electronics could be triggered to melt away before any classified information is gleaned by enemy forces.

A military device could collect and send data and then dissolve away, leaving no trace of an intelligence mission.

An environmental sensor could collect climate information and then wash away in the rain.