The introduction of conductive threads and wearable electronics together with the introduction of Lilypad Arduino microcontroller and Google’s Project Jacquard has revived the interest in the everyday article of clothing as a computing and interaction platform.

How about all that while not the necessity for onboard electronics or batteries?

The UW computer researchers have created smart fabrics that may store information, from security codes to ID labels, while not having any installed hardware or sensors.

The researchers at UW exploited previously unexplored magnetic properties of an off-the-shelf conductive thread. The information can be read using sensors in present smartphones, used to enable navigation.

“This could be a fully electronic-free design, which implies you’ll iron the smart cloth or place it within the washer and drier,” said senior author Shyam Gollakota, associate professor within the Paul G. Allen faculty of engineering & Engineering. “You can consider the material as a hard disk — you’re really doing this data storage on the clothes you are wearing.”

The UW researchers realized that conductive thread also has magnetic properties that may be exploited to store small amounts of information. The data can be read by a magnetometer, which is an inexpensive instrument that measures the direction and strength of magnetic fields and is present in almost all of the current smartphones.

“We are using something that already exists on a smartphone and uses nearly no power, therefore the cost of reading this sort of information is negligible,” said Gollakota.
One example of this — they stored the passcode to an electronic door lock on a patch of conductive cloth sewn to a shirt cuff and unlocked the door by waving the cuff before of an array of magnetometers.

The researchers created various fashion accessories, like a belt, tie, necklace, and wristband and successfully decoded the data by swiping a smartphone across them. 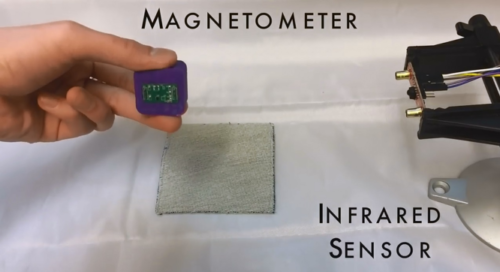 They used conventional sewing machines to embroider cloth with off-the-shelf conductive thread, whose magnetic poles start out in a random order. The researchers were able to physically align the poles in a positive or negative direction, which can correspond to the 1s and 0s in digital data, by rubbing a magnet against the fabric.

In different stress tests, the fabric preserved its information even when it has been machine washed, dried and ironed at temperatures of up to 320˚ F.

Presently, many smart fabrics need onboard circuits or sensors to work. This can be troublesome in case the user gets caught in the rain or forgets to detach those circuits before washing them. This can be a possible barrier to widespread adoption of different wearable technology designs. 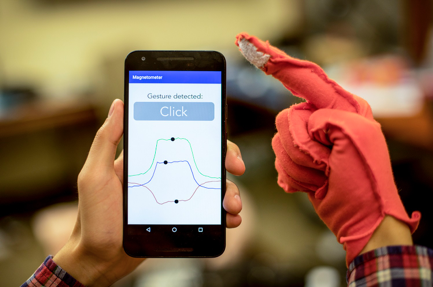 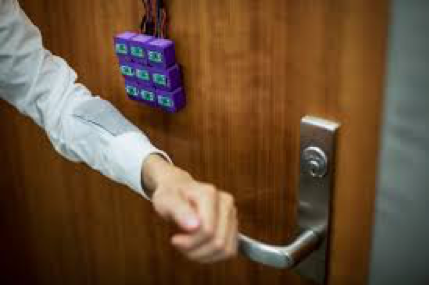 The team was able to successfully interact with magnetized cloth with a smartphone it was in the user’s pocket. Researchers developed a glove with the conductive fabric sewn into its fingertips, that was used to gesture at the smartphone. every gesture yields a distinct magnetic signal that may invoke specific actions like pausing or playing music.

“With this technique, we will simply interact with smart devices while not having to constantly take it out of our pockets,” said lead author Justin Chan, an Allen school doctoral student.

In the team’s tests, the phone could recognize six gestures — left flick, right flick, upward swipe, downward swipe, click back and click on. It also has a 90 % accuracy.

The approach conferred by UW computer scientists have few shortcomings, a number of them are as follows,

The proposed data storage system is prone to demagnetization in a very similar way that magnetic hard disks and hotel key cards can be erased when placed in a very strong magnetic field. As commercially offered conductive threads have a weak magnetic field strength, they’re best suited for storing temporary messages. With custom magnetic fabric, we may produce stronger magnetic fields that are more resilient to external magnetic fields.

Currently, the main focus is on classifying coarse-grained actions made with one finger. The classifier currently depends on hard-coded rules and doesn’t need previous training. However, there is nothing that fundamentally limits us from recognizing additional fine-grained inputs like words being written in mid-air or complex gestures made with four or 5 fingers. Such a system would require textiles designed to radiate a stronger magnetic field that could be detected further from the phone. Such a task would need multiple magnetometers to separate movements created by every finger.

The readings from a magnetometer change depending on its orientation to the Earth’s magnetic poles. As a result, the magnetometer must be stationary to avoid drastic changes in the sensor’s output. so as to get stable magnetometer readings in a mobile environment, we would have to compensate for the raw sensor readings with data from an accelerometer or gyroscope. this is feasible in the case of smartphones where all 3 sensors are prepacked onto the device.

Further research is towards developing custom textiles that generate stronger magnetic fields and are capable of storing a higher density of information.

The research was funded by the National Science Foundation, the Alfred P. Sloan Foundation and Google.

This article is based on a paper, Data Storage and Interaction using Magnetized Fabric by Justin Chan and Shyamnath Gollakota, University of Washington.