Security needs to become tighter
Smart lighting systems combine networking and software based intelligence to reap the energy-efficiency benefits of LED based light fixtures, but they can have security concerns too. Smart LED light bulbs, controlled remotely by mobile devices, can be vulnerable to hacking, unless powered by strong encryption algorithms.

Context Information Security recently discovered a security flaw in LIFX smart LED light. By posing as a new bulb joining the network, access could be gained to the master bulb to control every other light bulb connected to the network, thereby exposing the wireless network’s credentials. However, this task was not easy, probably due to the complexity of the device and all the reverse engineering it took to hack it. The company, LIFX, had acknowledged and identified the vulnerability and released a software update to fix the problem.

Needless to say, security needs to be highly prioritised, especially for devices getting onto the IoT arena, before organisations start to connect mission-critical devices and systems. 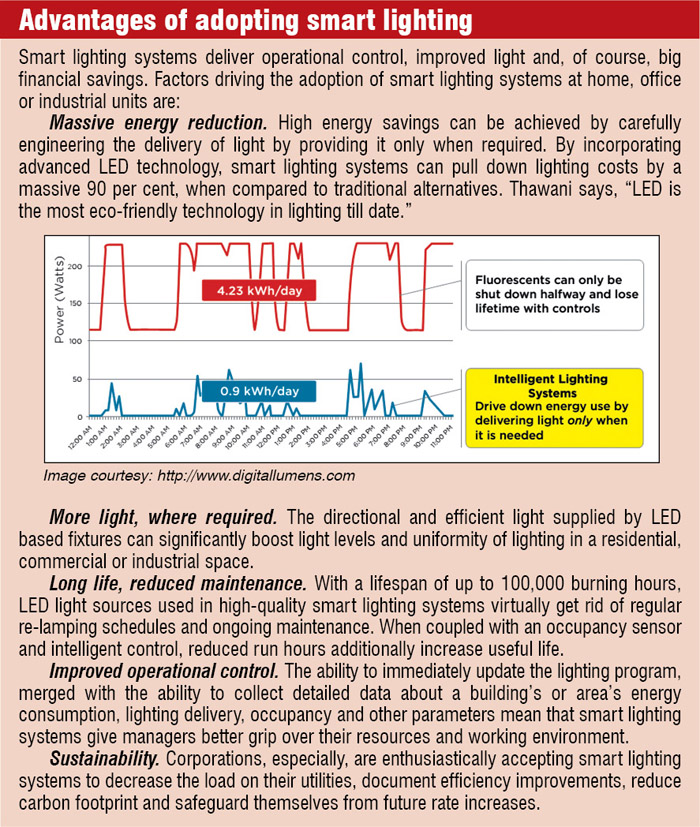 Improvements in LED technology
There have been key developments on the LED manufacturing side, such as superior materials, enhanced equipment and improved processes that have allowed the latest generation of LEDs to yield admirable light output, visual performance and space savings.

Advanced equipment. In the last decade or so, the equipment used to manufacture LED dyes has experienced significant enhancements. For all production processes, LED manufacturers were using class 10,000 clean room. Now, they have shifted to class 1000 clean room, which means that particles larger than half micrometre are not allowed in the space where LEDs are manufactured. Earlier, in class 10,000 clean room, up to 70 such particles could enter the space. Consequently, the structural efficiency of LEDs has increased to about 90 per cent, which, in turn, provides quality visual performance.

Enhanced processes. To provide better visual performance, red and blue dyes are fused in the same package coated with phosphor. This improvement in the manufacturing process creates a visually-appealing warm white light.

High-grade materials. Today, the wafers used to create LED dyes have doubled in size. Over a decade ago, seven-to-ten-centimetre wafers were used to manufacture LEDs, whereas today 15cm wafers are used that produce up to two times the volume of LEDs, resulting in cost-saving of about 30 to 50 per cent.

Innovative applications
The initial idea for smart lighting was remotely-controlling lighting, which includes dimming and switching it on/off. Today, there are a lot of other features being developed and incorporated. Bhaskar informs, “One such feature is occupancy-sensor-controlled lighting, where the entire room or certain section of it is lighted-up when a person enters and automatically turns off as the person exits the room.” Thawani adds, “Another feature, time-scheduled light control, helps gradually dimming the light as the day progresses. This can be achieved with the help of a microcontroller.”

Different lights in a room give different light-intensity outputs, according to the preferred mood-lighting presets. Jitin says, “Lights in a room change colour and intensity according to the beat of the music in that room, and the most interesting thing is that, all these are happening accurately with customisable preset recording or with a soft touch of your screen from your smartphone or tablet.”

Additionally, smart lighting can adjust from dark to light in a more gradual manner than conventional lighting. Jaiwin says, “This gives older eyes time to adjust and reduces undue strain. This saves energy and is safer to boot.”

All in all, smart lighting is very promising
Investing in intelligence rewards dividends. If you are considering a new installation or retrofit, developing a thorough understanding of smart lighting systems and opportunities they hold in store for greater operational and energy-efficiency is worthwhile. Lighting is usually the largest energy user in industrial, residential or commercial space, but is absolutely the easiest to address with smart lighting. It is time to get out your utility expenditure, start to assess your current lighting costs incurred every month and how far you can reduce that number with a smart lighting system.

The author is a senior technical correspondent at EFY