It also has eleven touch sensors, a speaker, voice and visual recognition. The gyrosensor, IR interface and remote controller can be used for a more sophisticated control of actions, sounds and emoticons that assist in communication.
Some specifications of the Robot Dog are as follows: 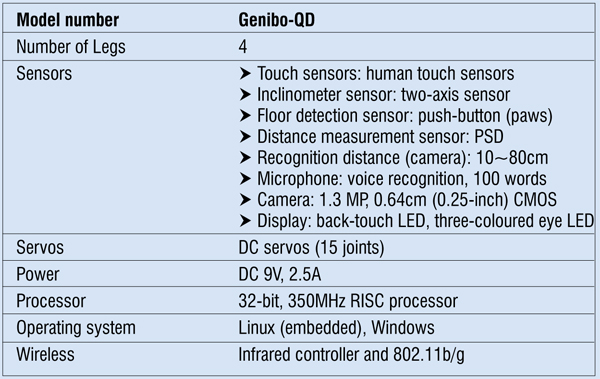 Wireless components. Most toys these days include wireless transceivers. 2.4 GHz wireless capability is not uncommon.

Actuators. Motors are the most common output of any toy. These may differ from basic direct-current (DC) motors to servo motors, depending on their application. “Some toys have IC engines on them, whereas for game-stations, the output is graphics on a television or computer screen,” explains Azad.

Selection of components
Most of the components used in today’s toys seem like those used in robots and smartphones, yet one cannot afford to use the very same high-end equipment in toys as in robots all the time. “In the selection of components, cost is one of the deciding factors. With similar set of features and functions, a toy cannot be priced as high as a robot. Since the sales volume is higher for toys, this issue can be handled to some extent,” says Jayakrishnan.

Some of the components are custom-made by or for the toymakers, while at other times the toymakers simply use off-the-shelf components. “The Lego Mindstorm processor, for example, is custom-made as the processor didn’t exist. Besides this, the Xbox 360 and Konnect sensors are also completely custom-made using existing technology. For some other simple autonomous applications, ready-made sensors and processes are also used,” says Azad.

Off-the-shelf components reduce the time and cost of development and are the firstchoice of any company. The cost of development of custom-made devices is quite high. A company would go in for it only when they are sure that it is going to be a disruptive technology, which will ensure them huge profits.While this difference is less critical for external and mechanical components, the cost difference can be extremely high for electronic components.

“For embedded platforms and sensors, toys and actual robots share a lot of common components. To cut down the cost companies often go for a different sort of package. Some chips can be bought as dies and then can be directly wire-bound to a PCB with an epoxy covering. In any case, the chip package can contribute up to near 50 per cent of the cost,” opines Jayakrishnan.

Toy-making is not child’s play
Forget being child’s play, it is not even just an art. Toy-making is a complete science. “It might comprise embedded systems, market research, manufacturing, product design, computer science, and various ranges of psychology. It takes a minimum of a year to come up with a high-end robotic toy. The aim of the team is to fulfil a requirement or need of the market, which has not been addressed so far, or to do it in a much more creative way,” says Azad.

In doing so, there are multiple factors such as user-friendliness, price, standards, safety regulations, etc, that a robot-toy team should keep in mind.

Keep it simple. The more interactive a toy, the more complex are the components inside it. However, this complexity should be hidden completely from the users. The toy should be really easy to use, as the users or children are obviously not going to read a 200-page manual before beginning to use the toy.

Price it optimally. The toy should also be optimally priced, in sync with a toy’s capabilities. “Minimal number of components should be used, and all the devices should be used to the maximum capabilities, because as and when the components increase the cost of the toy also increases. The kind of features the toy promises should justify the cost of the product, or the consumer will never pay for the safety and its standards. Every component used for the making of toys should be sent to the laboratory for testing before it is launched in the market,” says Azad.