Understanding Lasers and Their Applications

Lasers are wonderful devices with enormous application potential. This article gives you an insight into their basic characteristics, classification and applications -- Nakul Maini

Computer applications. Lasers are widely used in reproduction of music stored in compact optical disks (CDs). These lasers are tiny inexpensive semiconductor lasers, buried deep inside compact disk players, which can only be observed if you disassemble the player.

Laser printers (Fig. 11) and scanners are very common these days. These can be connected individually to computers or accessed by a group of workers through a network.

Fibre-optic communications. Fibre-optics has become the dominant medium for long-distance telecommunications around the world. Optical fibres in submarine cables carry telephone calls under the Atlantic and Pacific oceans.

Medical applications. Physicians were not far behind engineers when it came to using lasers. Dermatologists and ophthalmologists were the first to use lasers. However, it was not long before other specialists started working with lasers. Today, lasers are widely used in medicine.

Military applications. There has been a dramatic increase in the commercial, industrial, medical, scientific and military applications of lasers in the last couple of decades. During this period we have witnessed lasers making their presence felt very effectively in many new areas. While on one hand, the systems used for military applications such as range finders, laser target designators and laser-guided munitions (Fig. 14) continue to improve in terms of performance specifications and system engineering, a lot of effort is being put around the world in the technologically developed countries to exploit the potential of lasers in a domain that is different from that of the existing usage.

Low-energy laser weapons refer to the electro-optic countermeasures class of laser systems and their different variants. These include anti-sensor laser weapons and anti-personnel laser weapons.

Anti-personnel laser weapons are capable of again either temporarily or permanently blinding armed personnel, though there seems to be some sort of an agreement among the various countries to develop and deploy only the dazzlers and not the permanent blinders.

High-energy laser weapons refer to lasers generating several hundreds of kilowatts of continuous-wave laser power, or megawatts of pulsed power, and capable of causing a structural damage to hostile targets like aircrafts and missiles over ranges extending up to hundreds of kilometres. In some of the developed countries, a lot of development and experimental activities are going on for different types of high-power laser sources that can be converted into viable weapons to enhance the performance specifications and improve upon system interface and integration aspects. 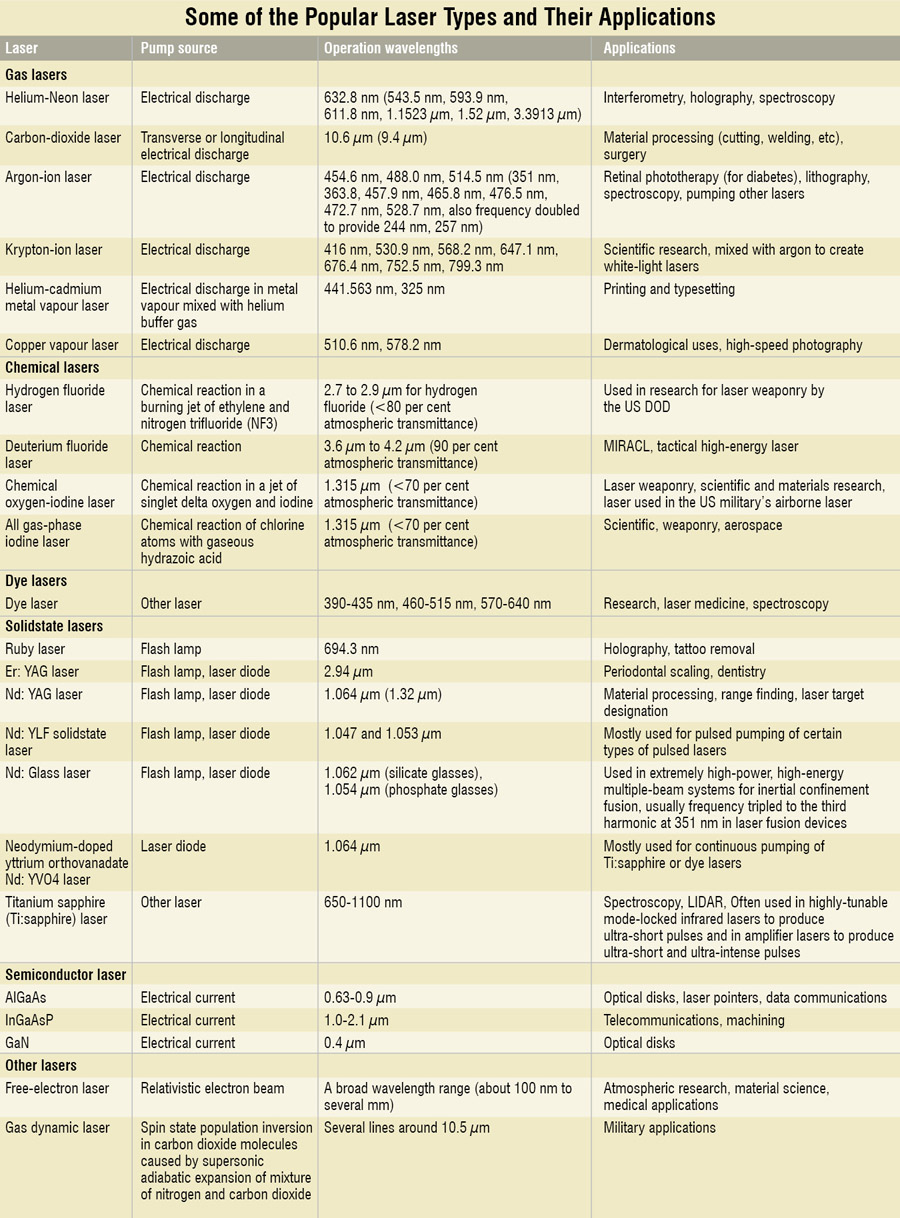 Laser, as coined by Gordon Gould in his notebooks, is a household name today. It is undoubtedly one of the greatest inventions of the second half of the twentieth century along with satellites, computers and integrated circuits. Laser, which was called an invention in search of applications in 1960s, continues to be so even today due to the unlimited application potential it holds. This explosive growth in laser applications has largely been backed by unique characteristics of laser as outlined earlier in the article.

Though there is an expanded use of laser and laser technology in commercial, industrial, bio-medical, scientific and military applications, the areas of its usage are multiplying and so are the applications in each one of those categories.

Lasers have been used in the past and would continue to be used in the future for applications like materials processing in industries, diagnostics and therapeutics in medicine, range finding and target designation in defence, environment sciences, astronomy, plasma studies and spectroscopy in scientific and technological research. What would be watched with interest in the future is the gigantic growth in the field of laser technology in the form of newer wavelengths, more efficient and powerful lasers, and laser applications such as emergence of directed-energy laser weapons, laser-assisted propulsion and removal of space debris, and ultra-high-resolution imaging to open a whole new range of healthcare applications.

The story is not yet over.

The author is a B.Tech in electronics and communication from Amity University, Noida