Altium Designer—an EDA software package for printed circuit board, FPGA and embedded software design. It is developed and marketed by Altium Limited of Australia. Here we take a look at its features

It is often felt that as manufacturing processes migrate to the region with the lowest cost, developed economies suffer. However, another way to look at it is that by outsourcing lower-value tasks, the resources previously occupied with them are now presented with much greater opportunities.

Design draws the same analogy: By employing design automation tools, engineers are able to increase their productivity. Today, engineers don’t even think of a non-computerised approach to designing a PCB.

Frank Kramer, technical marketing director, EMEA, Altium Europe GmbH, says, “For electronic design engineers, use of EDA tools has led to vast improvements in the design process, from the component all the way down to the end product. Along with accelerating the design process, it is now possible to simulate or emulate every part of an electronic design before a single component is even purchased. In the field of IC development, for example, the very last step in a long and expensive process is to commit—or ‘tape out’—a design to silicon. This, however, is largely due to the cost involved in manufacturing integrated devices—a cost that is only borne by the opportunity of selling the final device in large volumes.”

Altium Designer presents hardware engineers, experienced FPGA engineers and embedded software developers a genuine opportunity to perform embedded system design in an FPGA, moving it to a state of achievable reality from an inaccessible dream.

Key features of Altium Designer
Advances in EDA tools have made it easier to simulate a product’s form fit and function before the product is manufactured. Regardless of this fact, with the obvious exception of IC design, the progress of design automation tools in the electronics sector has maintained focus on niche applications and vertical markets.

PCB design. Altium Designer provides a single application environment for capturing design data, verifying the performance of the circuit and designing the PCB, thereby unifying the process of board-level design. The single system and single model of the design data redefine the way designers work by enabling single-point data management, real-time design synchronisation and smooth design collaboration with all domains.

FPGA design. Today, devices have sufficient capacity to implement more than just some of the hardware in a product—they can be programmed to implement an entire digital system, including the processor, along with peripheral components and the logic for interface. Altium Designer assists design engineers in creating an environment that solves system integration issues; design engineers can capture the hardware design, write the embedded software for the processor, and implement, test and debug both the hardware and the software on the target FPGA.

3D PCB layout environment. Today, tools that make it easier to view your designs are in demand. Taking advantage of DirectX capabilities, Altium Designer’s PCB visualisation capabilities allow you to customise and configure your design view for both 2D and 3D displays so that you can inspect and edit objects such as pads, via barrels, both on the surface and internally from a 3D perspective.

3D mechanical enclosure checking. Altium Designer offers high levels of interaction with your MCAD data. This means that now you can import, manipulate and check mechanical design elements against the PCB design directly. 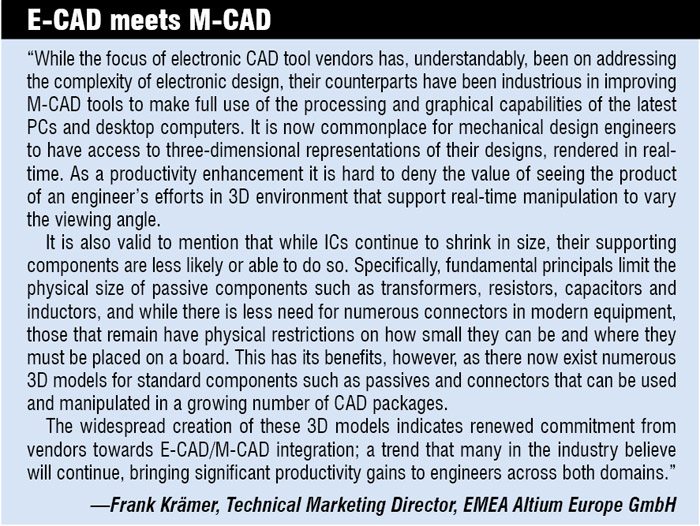 Huge library of components. Altium Designer delivers over 95,000 components out of the box. Not only are all the parts IPC-compliant, but the library also includes a table-driven IPC footprint builder. Altium Designer has live links with Farnell, Digi-Key and Newark to automatically update and populate your library with component information.