In order to explain this better, a program was tested with several corrections to the errors that occurred in the design of the VLSI microprocessor at the IEEE Design Automation Conference. It was found that after correction, the circuit was incrementally re-simulated 1.6 to 3500 times faster than the simulation of the entire circuit.

Two simulation models. IRSIM has two different simulation models: switch and linear. It is considered to be an event-driven simulator that uses the switch model to simulate the transistor modelled as a voltage-controlled switch. This model is useful for determining and initialising network functionality.

Whereas the other type of circuit that has a transistor modelled as a resistor (R) in series with a voltage-controlled switch and a capacitor (C) at each node uses the linear model of IRSIM. The resulting RC network helps compute transition times and node values.

Uses text editor. It provides an easy-to-use text editor that can be easily converted into a simulation (.sim) file.

IRSIM also helps identify the total number of transistors in a circuit.

Non-realistic simulation
IRSIM has no way to determine the charging and discharging of the circuit at the nodes without information about parasitic capacitances to the substrate, along with drain and source sizes of the MOS transistor. It sets all these to a minimum time step for fast fabrication of the circuit, but it might not be realistic in most of the cases.

Then there are circuits that hold some value on an electrically-isolated node of the circuit and expect the charge on this node to set a value on a different node through charge sharing. These circuits are dangerous and highly dependent on process parameters. Simulation of such circuits using IRSIM will again be non-realistic, as these will assume the voltages at isolated nodes to be constant. 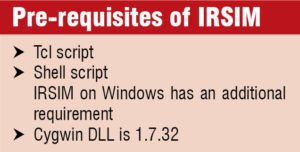 One user on http://opencircuitdesign.com/ likes IRSIM over SPICE because of three important reasons: IRSIM treats transistors as ideal switches; IRSIM, although designed to run in the background, displays information regarding values of signals on VLSI layout; and IRSIM allows quick simulation. The user says, “In my opinion, it is much easier to write complicated test bench simulations using Tcl and IRSIM. I have used IRSIM to validate digital parts of several production chips at MultiGiG, including the simulation of analogue behaviour such as PLL locking.”

However, another user at http://www.edaboard.com/ finds it difficult to identify the input for an inverter circuit using IRSIM.

IRSIM has undergone plenty of revisions to try to be the best in its field, but we all know that nothing in this world is perfect. The current version of this tool does not have any way either to remove or reload a file that is being simulated. So, in case you are simulating a wrong file, you will have to wait till simulation is over.

Thus, although IRSIM is quick, it cannot be used for all types of circuits, as it cannot detect sensitive errors in the circuit. However, if the circuit is detected as error-free, IRSIM can give accurate simulation results.

The author is a technical writer at EFY

Sense Depth in Complete Darkness Using this ToF Based Camera