These filters address the stringent thermal challenges of multi-user multiple-input/multiple-output (MU-MIMO) systems, without compromising harmonic compliance and emissions performance. This is critical to achieving reliable coverage across the full allocated spectrum.

But why do high-Q BAW filters make such a difference for FCC band edges?

As you move into higher bandwidths like Wi-Fi, surface acoustic wave (SAW) devices can suffer from higher insertion losses than BAW due to radiation of acoustic energy into the bulk of the substrate. As shown in the following figure, as you move up (to the right) in frequency, you can see high-Q BAW is a good option for filter designs due to this bulk radiation loss effect. Also, BAW maintains the steep skirts required for FCC band edges; SAW can’t meet the performance requirements at these higher frequencies.

BAW also has better temperature stability than other technologies, which gives it an advantage during FCC certification tests. Most Wi-Fi designs are created at room temperature (20-25°C) on a bench, but the system in its application environment can actually operate around 60-80°C. Insertion loss increases as temperature increases, and failing to estimate for this can cause issues during product certification. Using BAW reduces the shifts in insertion loss and makes certification test results more predictable.

As shown in the following figure, the bandedge response is better using a filter than without it, and it allows designers to push the limit on RF front-end output power while meeting the FCC requirement for power spectral density. This means bandedge BAW filtering allows operators and manufacturers to deliver high-speed data and greater bandwidth by using spectrum that might be lost with no filtering. 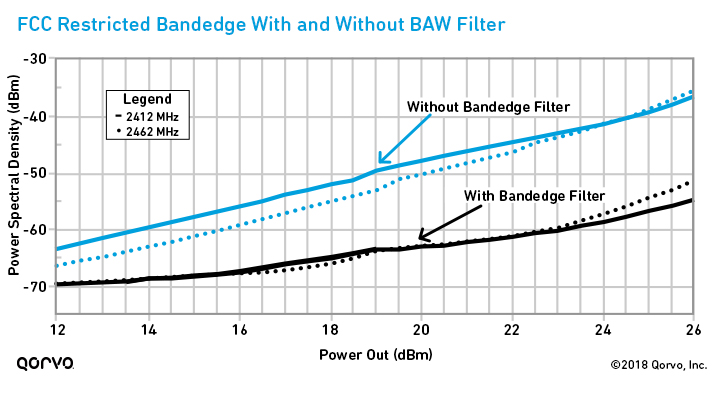 Wi-Fi designers normally must set the entire unit power to whatever the lowest bandedge-compliant power is for all channels. So, if the compliant channel at channel 1 is 15 dBm but channel 6 can achieve 23 dBm, the designer settles the entire power control scheme to 15 dBm. Using bandedge filtering allows designers to set the power scheme to much higher powers, thus making it possible to use fewer RF chains to achieve their goals.

BAW bandedge filters can also exhibit power handling capabilities for transmitting up to 28 dBm. This can improve system performance by greater than 15 percent and enable 5G multi-MIMO with less co-channel interference.

CPE developers who don’t use bandedge filtering have difficulty meeting FCC requirements on Wi-Fi band channels 1 and 11. In contrast, when high-Q BAW bandedge filters are used, it allows the CPE designer to keep the power level the same throughout all the channels (1 – 11).

To paint the picture, here’s the difference in user experience with and without bandedge filters: 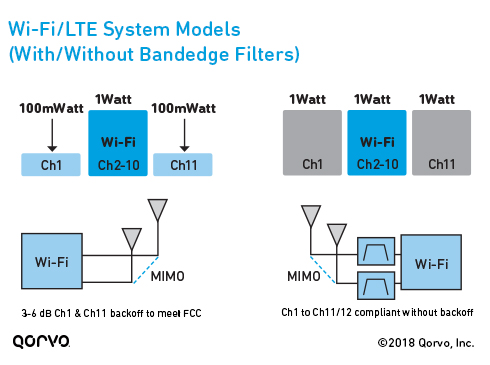