Circuit diagram of the transmitter unit is shown in Fig. 1. It consists of 433MHz RFtransmitter module TX1, an encoder HT12E (IC2), a 5V regulator 7805 (IC1), DIP switch DIP1, npn transistors BC547 (T1-T4), connector CON2 for connecting the sensors in the overhead tank and a few other components.

Bases of T1 through T4 are connected with resistors R7 through

R10. Each water-level sensor is connected to the circuit through R7 through R10. Water levels are marked as low (L), middle (M), full (F) and overflow (O) in the circuit. The common terminal is marked as C on CON2. 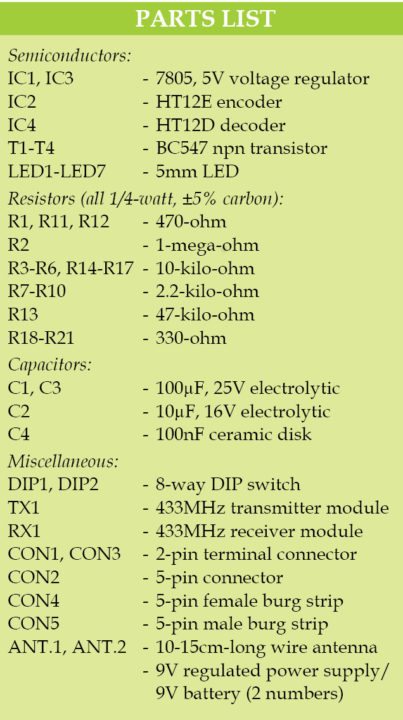 water level increases, the transistors conduct and the output signal at their collector changes. Output of each transistor is fed to IC2. Encoded data from IC2 is transmitted through TX1.

Data is received by RX1 and decoded by IC4. Different water levels are indicated by the glowing of LED4 through LED7. Resistors R14 through R17 are pullups connected to IC4.

General-purpose 9V batteries are used to power both the circuits. LED1 and LED2 are power indicators and LED3 is used to indicate a valid transmission status.

You can use 9V regulated power supplies instead of batteries to power the circuits. For troubleshooting, check voltages at various points mentioned in the test point table.

Make a separate PCB for the LED indication (shown by the dotted lines on the right side of Fig. 6). Use different LED colours for different levels.

Use a waterproof box for the transmitter unit to protect it from rain water.

When both the circuits are switched on and LED3 glows, it indicates that the transmitter unit and the receiver unit are connected successfully. If the addresses of the units are different, LED3 will not glow.

Use DIP switches (DIP1 and DIP2) to set the addresses. Switch on pins 1, 2 and 7 of both the DIP switches to make a secure connection.

This will prevent interference from nearby RF transmitters. Connect the sensors in the tank as shown in fig .7.

Author’s prototypes of the transmitter and receiver units are shown in Figs 8 and 9, respectively.

Pranav Rameshji Rokde is a Electronics enthusiast from Nagpur, Maharashtra