The introduction of eSIM (embedded SIM) has helped in the growth and transformation of the Internet of Things (IoT) based devices to a large extent by allowing manufacturers to build a new range of products for global deployment. eSIMs have brought a new experience and advantages over ordinary SIM cards. However, there’s still a lot to explore and cover in this field to tap the maximum benefits.

The life of mobile phones probably began with SIM cards. Today, most of the mobile activities are carried out through SIM cards. It is also true that SIM cards have greater potential for online activities like the Internet, telephony, multimedia, etc. With the launch of Apple Watch 3, the term ‘eSIM’ started gaining popularity. And now, Google’s Pixel 2 is the first phone to use this technology.

Since eSIM is a digital SIM, it allows you to activate a cellular plan from your carrier without having to use the replacable physical SIM.

eSIM is the only globally-backed remote SIM specification for consumer devices. This universal approach will help in the growth of the Internet of Things (IoT) based devices to a large extent by allowing manufacturers to build a new range of products for global deployment based on this common embedded SIM architecture. This article covers how eSIM can bring new experiences and offer better advantages over ordinary SIM cards.

Progress made in eSIM

Since 2018, the GSMA (Global System Mobile Application) is working with leading mobile operators, device makers, and SIM manufacturers worldwide for developing universal standards for eSIMs that can be deployed globally. The standard contains a wide range of features, including an option for eSIMs to be locked.

2nd World eSIM 2018 Summit and Mobile World Congress, which took place in Berlin in February 2018, stressed upon a greater impact of eSIMs on consumer IoT and M2M markets. This is mainly due to the fact that stakeholders [mobile operators, OEMs, eSIM providers, mobile virtual network operators (MVNO), etc] are now well knowledgeable about what an eSIM is and how it can be used efficiently. As a result of the ‘yes-we-can’ attitude, eSIM has now been widely deployed in M2M markets such as automotive, smart meters, and vending machines. It is necessary to deploy new roles for eSIM in terms of 5G security, particularly in subscriber identity privacy, cyber resistance, 5G roaming, or even network authentication. 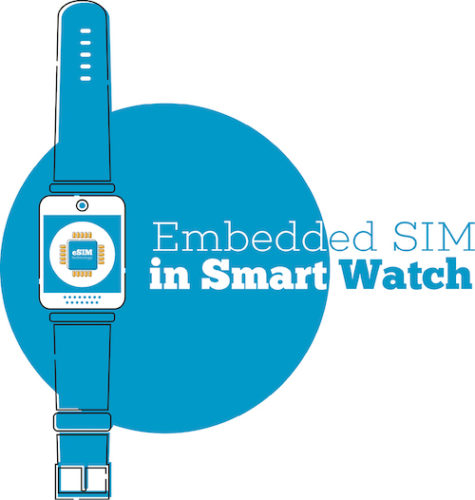 Presently, Samsung is adopting the SM-DP+ architecture, which is responsible for the creation, generation, management, and protection of resolution profiles at the input/request of the operator. eSIM manufacturer is responsible for the initial cryptographic configuration and security architecture of eSIM and is also the provider of eSIM products. The operator provides access and communication services to subscribers through its mobile network infrastructure.

This is a communication profile. Initially, it is stored in the eSIM when it is shipped.

This is a communication profile for connecting enterprise servers or the Internet.

Researchers have demonstrated how the use of eSIM can dramatically accelerate the growth and ecosystem of mobile phones. Unfortunately, today there are only a few mobile phone devices that are eSIM ready. The eSIM logo is required to help manufacturing companies to promote their eSIM-enabled products.

We may get the first device without traditional SIM cards in 2020. eSIM needs to be supported by a carrier or network. Though XR, XS, and XSMax have physical SIM slots, eSIM inside these handsets is used as second SIM support. eSIM is backed by GSMA. iPad Pro, Apple watch series 3, and iPhone XI are planning to move completely to eSIMs, and this could happen in 2020.

Some Windows 10 devices also support eSIM that lets you connect to a cellular data network. eSIMs are likely to play a key role in the next generation home-based LTE connected computers. You can have more than one eSIM on your phone, but you can use only one of these at a time.

With eSIM supported smartphones, you need a carrier app or a QR code that you can scan. In the UK, EE (Everything Everywhere) and Vodafone support eSIM, although Vodafone is currently only supporting it for Apple Watch Series 3, 4, or 5 Cellular. In the US, AT&T, T-Mobile, and Verizon Wireless support eSIM.

Airtel is one of the first telecom operators from India to introduce eSIM technology in the country. This is one huge change in the telecom industry of the nation. During the launch of the iPhone XS, Airtel was the only Indian network operator to immediately support eSIM activation. Even Reliance Jio has partnered with Apple to sell eSIM-enabled Apple watches.

China can become a significant driver in the adoption of this new technology in mobile phones. According to a report, China’s usage of eSIMs is starting to grow, particularly in smartwatches. Currently, their usage is low, but it is expected to grow in the future.

Chinese state-owned telecom operator, China Unicom, announced in February 2019 that it would extend its eSIM business nationwide after a long trial in seven cities. The telecom giant has said that it has built an eSIM management system using its own, self-developed technology. The company also announced that it has integrated its eSIM technology with more than twenty intelligent devices, including Apple Watch 4. All three Chinese SIM hardware manufacturers—China Mobile, China Telecom, and China Unicom—have launched their respective eSIM solutions.

The humble SIM card has survived for quite a long period but finally looks like the era of SIM cards is on its way out. Why?

It’s just because of eSIM, a much smarter technology. This new technology is surely going to be the future of SIM technology.

For IoT platforms, eSIMs can bring a greater change. The Hyundai Venue model car has already got an eSIM feature. Growing awareness about wearable devices and surge in mobile computing are pushing up the eSIM market. However, the lack of regulations and concerns related to security may impede eSIM market growth for next 3-4 years.

“eSIM market in the Asia Pacific may grow faster over the next five years due to the presence of favourable government regulations for telecommunications,” says Karan Chechi, research director at TechSci Research.

An in-depth study and analysis are required for further developments in eSIM. Recent technologies like artificial intelligence (AI), machine learning (ML), and Big Data can be used to make further improvements in eSIM.

Several giants like AT&T, China Telecom, Airtel, Vodafone, and other SIM service providing companies are trying to bring several innovations in this sector. Thus, next-generation smartphone development has already begun with the slow but steady emergence of eSIMs.

Vinayak Ramachandra Adkoli is BE in industrial production. He has been a lecturer in mechanical department for ten years in three different polytechnics. He is also a freelance writer and cartoonist