Choosing the best smartphone under Rs 10,000

Check out these features, in the smartphones you are considering, before deciding on the best smartphone under 10000 to get the best value for your money. It explains what the different smartphone specifications represent and what’s available from various brands.

Processor makes your smartphone run the functions you want. It consists of multiple units called ‘cores.’ The more the number of cores, the better the work division the processor can carry out. As a result, it becomes easier for the phone to run multiple applications at a time without any hiccups.

The smartphone’s performance also depends on the processor’s clock speed, which is measured in gigahertz (GHz). This, in turn, utilises the number of bits labelled on the processor to perform a function in a given time. Processors are usually 32-bit or 64-bit—the higher the bit count, the more the data it can handle at a clock beat. Again, the higher the clock speed, the more the actions utilising the bits. So, for example, a 2.4GHz octa-core processor works better than a 1.2GHz octa-core processor, and a 2.4GHz 64-bit chip is better than a 2.4GHz 32-bit chip.

In the market, you will find smartphones with different processor options, the majority of which use Snapdragon and Mediatek. Mediatek is an adequate processor choice for low-budget phones, given its low power consumption and high load capacity at reasonable price. Snapdragon chipsets are usually used in comparatively costlier phones. Improved performance and efficiency make Snapdragon a good catch. Quite a few low-budget phones incorporate Spreadtrum processors. System-on-chip technology brings the whole system—including the graphic processing unit (GPU)—to the processor. Snapdragon processors come with Adreno GPU, while Mediatek or Exynos processors carry a Mali unit. GPU performance can be judged from its version and benchmark tests. 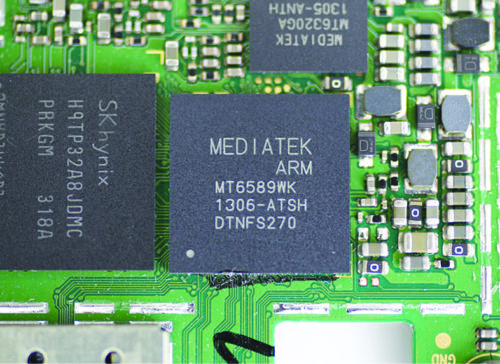 Random access memory (RAM) is responsible for the ease of information retrieval—eliminating for the system the need to access the storage or SD card to run an application. RAM holds the running as well as background apps for quick access when the app is run the next time. Consequently, it greatly eases the load on the system, allowing the phone to run smoother.

Operating system (OS) and user interface (UI) occupy a big chunk of the RAM. The remaining space is used by applications to work. So, the bigger the RAM, the greater will be the capacity to perform applications. Look out for a phone with at least 2GB RAM.

Display brightness is important for a vibrant and realistic viewing experience as well as comfortable viewing outdoors. LCD screens have been a long-time reliable companion for smartphones. The new AMOLED displays offer better colour contrasts. With recent upgrades, these are now readable in sunlight too.

The resolution of a smartphone is determined not only by its pixel measurement but also by its screen size—combining which you can get an idea of the pixel density, that is, the number of pixels fitting per square inch of the phone screen. Higher pixel density is desirable to get a better image. Generally, low-end smartphones have either HD (1280×720-pixel) or Full HD (1920×1080-pixel) resolution. Screen size of 12.7cm (5 inches) is the best fit if you want the phone to be compact yet comfortable to use.

Don’t settle for a phone with battery capacity of less than 3000 milliampere-hour (mAh). Though the battery life depends majorly on the extent of use, a 3000mAh battery will ensure one day of moderate use, including running applications, 4G connectivity as well as photo/video capture. In fact, you can also find a few options featuring a massive 4000mAh battery within your tight budget.

Go for a 4G-compatible handset as 4G connection has become the norm today with major telecom operators rolling out their 4G networks. Note that some phones may or may not support multiple SIMs, so decide as per your needs. Budget phones today offer an internal storage of 32GB and an expansion slot, which should be your ideal base expectation.

The general perception is that the megapixel capacity of a camera is the indicator of its quality. While it is true to some extent, the other major factor is the aperture, which is the diameter of the camera lens opening. Larger aperture can capture more light and thus render sharper pictures.

The aperture is represented as an ‘f’ number, such as f/1.8, f/2.2 and so on. The lower the numeric value in the denominator, the bigger the aperture. For instance, f/1.8 denotes a bigger aperture than f/2.2. A bigger aperture covers a bigger field of image, but loses the sharpness if a single object is to be focused on. Smaller apertures are better for focusing on individual objects, delivering greater image sharpness.