Using renewable energy sources like wind and solar for power generation has helped in reducing carbon footprints and made power available to non-electrified remote areas. A Wind Solar hybrid power system that combines the benefits of both sources can improve the reliability and stability of the grid to deliver non-intermittent electric power.

Sustainable power generation through renewable energy, instead of conventional fossil fuels, has not only helped in reducing carbon footprints but also made power available to non-electrified remote areas. While choosing green energy options for a region, several factors like geographic variability, economic feasibility, and so on need to be considered.

For complete reliance on renewable energy like solar or wind, it must be available in all seasons. However, this is not the actual case due to unpredictable weather. For example, solar energy cannot be harnessed to its full potential in monsoon, and wind speeds may be highest in one season and not so in others. In areas where more than one renewable energy like wind or solar is available, a hybrid power system that combines their benefits can improve the reliability and stability of the grid.

Wind-solar hybrid systems interface wind turbine generators and solar panels to generate power in a decentralised mode, typically in the range of 1kW to 10kW. The standalone system is connected to a charge controller that can handle both systems for charging the battery so that energy can be used whenever needed. A compatible inverter converts DC output to AC for purposes like power distribution, powering appliances like refrigerator and oven, and so on. In case of on-grid hybrid systems, the battery is charged by the grid when both solar and wind are not available.

These systems can be installed on rooftops if size permits. The cost varies based on the ratio of wind and solar components and maybe even cheaper than a solar system. The size of the battery storage also gets reduced, which makes it easier to handle.

The generation of power from wind energy is done by wind turbines (commonly vertical or horizontal axis), whose blades rotate with wind blowing within the range of defined cut in (usually, a minimum of 4-5m/s) and cut off speeds, coupled with generators. The axis of rotation of the turbines must align with the wind direction.

Solar power systems have solar panels, which consist of photovoltaic (PV) cells that utilise sunlight to generate electrical energy. Factors like sunlight intensity and duration, as well as cleanliness of panels and their orientation, need to be considered for efficient solar panel arrangement. Some arrangements also involve moving solar panels in an accurate direction by tracking the sun to get more light. 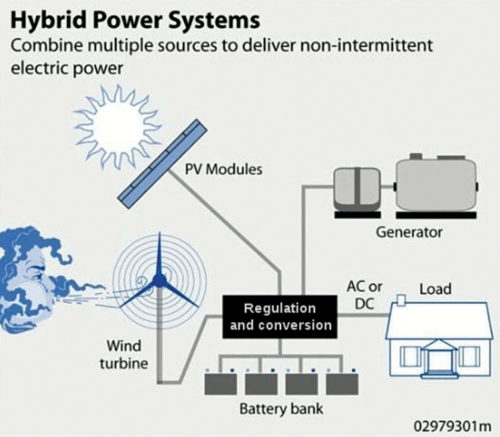 Hybrid systems are often used for small loads. In the residential sector, there has been significant adoption—particularly in single-family homes, luxury apartments, and large multi-family buildings—to fulfil a definite set of power requirements. In commercial and industrial sectors, these can be used in places with chronic power shortage, or where the grid has not reached—like rural offices, schools or small hotels for basic needs—as only a few loads like fans and lights have to be powered. Due to this, standalone hybrid systems are generally preferred over on-grid systems.

Other application areas include military and railways. Indian Railways, for example, is already issuing tenders to implement wind-solar hybrid projects.

In spite of the potential of hybrid systems, a high initial investment, considerable duration for payback, and uncertainty about their applicability makes people skeptical regarding their viability, thereby decreasing the rate of adoption and implementation in various countries. To bring a positive change, several companies in India are working in the area of wind-solar hybrid, including Supernova Technologies Private Limited, Zenith Solar Systems, Alpha Windmills, Unitron Energy System Pvt Ltd, and ReGen Powertech Pvt Ltd. The Ministry of New and Renewable Energy (MNRE) has introduced the National Wind-Solar Hybrid Policy to promote large-scale wind-solar hybrid power projects through measures like encouragement to technological advancements and better utilisation of transmission infrastructure.

Outside India too, various initiatives are being taken to boost the sector. Gamesa, Blue Pacific Solar Products, Grupo Dragon, and Alternate Energy Company are some of the popular names in this field. Last year, the Kenyan Investment Authority and Meru County Government entered into a Memorandum of Understanding (MoU) with Windlab and Eurus Energy for the development of the Meru County Energy Park, African continent’s first large-scale wind-solar-storage hybrid project. The aim is to produce up to 80MW of clean energy to power homes, and construction is expected to begin next year.