While there is no common definition of what 5G is as yet, it will be very important to connecting machines and people to each other across the planet. However, will it be just another increase to the peak bandwidth? Read this interview to find out. Mr. Rahman Jamal, Global Technology & Marketing Director at National Instruments, speaks to Dilin Anand from EFY.

Q. What’s driving the Internet of Things (IoT) from the technological 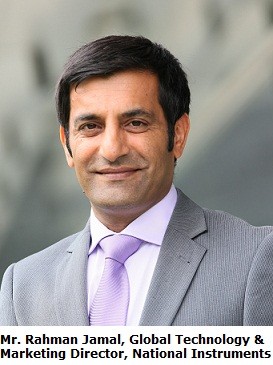 A. There are a number of technologies that are driving this trend. First of all you have a couple of laws that are making these things affordable like Moore’s law which states that the number of transistors per square inch on integrated circuits had doubled every year since the integrated circuit was invented. The other driving elements are Metcalfe’s law, Neilsen’s law, increasing number of systems going from wired to wireless, and finally sensors, which are the sense organs of the IoT.

Q. Could you elaborate a bit on these other laws driving the IoT?

A. Moore’s law has guided us over the past few decades to as we have made processors smaller, faster, and more affordable, putting a sea of transistors on a fraction of a square inch. In the coming decades, technologists estimate that processors will have more power than the human brain. Metcalfe’s law has shown us that every time we add a node to a network, the value increases by a factor of 2, encouraging us to connect everything and synthesize the data. So you get more benefit out of the connectedness and it just keeps on increasing as more things are connected to it. Nielsen’s Law on the other hand is about the bandwidth of the data highway, namely the internet, and states that a high-end user’s connection speed grows by 50% per year. As far as the battery technology is concerned, it needs to improve continually with new compounds and enabled electronics to become detached from the grid for longer amounts of time. Today, mobile phones can fully operate for well over 12 hours on a single charge. Last but not least, we have the sensors that are the sense organs of the IoT. The more sensing you add to the “things” that are connected, the more context-aware they become, and combined with data analytics, they can give you more valuable information.

Q. How important will the 5th generation (5G) telecommunications networks be to the success of the IoT?

A. Though today’s 4G networks incorporate the latest technologies and continue to offer faster data access, the road beyond LTE and LTE-A is far from clear. The rapid consumption of wireless data continues to outpace the industry’s ability to meet demand. However, faster data and greater access are only part of the story. The mobile Internet has painted a picture of continued innovation and inspired researchers all over the world to think beyond faster data and greater capacity. These new networks, referred to as fifth generation or 5G, may transform our lives yet again and unleash enormous economic potential.

It is clear: 5G networks must accommodate many more users and devices while delivering more data to each user at any instant in time. Researchers envision not only a 5G network with unprecedented data rates and mobile access but also an opportunity to redefine the network to accommodate a wealth of new and diverse connected devices.

Faster data access is certainly exciting, but there are challenges to achieving this. The spectrum that service operators paid governments billions of dollars to acquire has simply run out. Today’s networks use spectrum anywhere from 700 MHz to almost 3 GHz, and a variety of public and private entities already claim this spectrum. This challenge can be met in two ways: (1) explore new spectrum or (2) develop new technologies to send more bits to users in the currently allocated spectrum.

By 2020, industry analysts predict 50 billion devices will be connected to mobile networks worldwide, and these aren’t just devices connected to a human hand. Embedded devices sending bits of information to other devices, servers, or the cloud will account for a large percentage of the devices.

A. There are a number of universities and research institutes who are looking at different aspects of it. For instance the 5G wireless lab in Germany led by Professor Dr. Gerhard Fettweis at the Technische Universität Dresden. He is looking at 5G from the waveform perspective and designing OFDM prototyping systems based on NI’s RF and communication tools. His method is called the Generalised Frequency Division Multiplexing (GFDM). He basically looks at the spectrum, and implements developments on that and optimises it for 5G. At the University of New York (NYU) Dr. Theodore S. Rappaport is looking into millimetre waves around 28 GHz, 38 GHz, and the 71 GHz to 76 GHz range. Apart from this, there is a massive multiple-input and multiple-output (MIMO) movement that is also happening. In addition to that Nokia Networks has prototyped a mmWave communication link and is achieving data rates 100X above current 4G rates with deterministic latency. By using NI’s integrated hardware and software baseband platform, Nokia plans to expedite its research and rapidly demonstrate the viability of high-frequency millimeter wave as an option for 5G radio access technology.

Q. Could you elaborate on how technology is taking this to the next level?

A. Let me use an example from India that came to me while I was taking a ride to the office today. The traffic here flows and seems to regulate itself. There are lanes, but no one really follows them. The roads themselves keep changing from one lane to multiple lanes and back quite randomly. However the entire system regulates itself because there is this collective intelligence or consciousness of the people operating the vehicles. In contrast to this in the Western world, we find a more centrally controlled traffic system à la stop and go, which from my perspective is not very efficient. The flexibility is not there because the lanes are of fixed size, and the whole bandwidth is not used all the time – you might find one side of a four-lane highway completely empty while the other side is jammed. Back in India, the whole bandwidth is being regulated according to the intelligence of people on the road at that time.

Q. We’ve seen cars like Mahindra’s e2o use existing telecommunications networks for their IoT-like features. Will the next generation of connected cars need 5G?

A. Good question. Now when the cars begin communicating with each other, they would not just be sending single data, they would also send waveform data. The waveform data requires a different bandwidth when these cars really need to talk to each other – and 5G will hopefully meet these capability needs. In fact Professor Fettweis talks about the need for 5G in this context specifically.

Q. What is your personal favourite example to show how technology penetrated into every aspect of our lives?

A. There are these two pictures of Saint Peter’s in Rome where a crowd of people is waiting for the announcement of who the new Pope is going to be. The first picture is from 2005, the second one from 2013. In the first image you just see a crowd of people, whereas the second one shows the crowd lit up by the glowing screen of mobile phones in almost every hand and the mobile phone is used as a camera here.

Going a step further, I would say today we are moving content like data, video, etc. around. The world of tomorrow will be more about steering and controlling our real and virtual environment.