The device delivers up to four hours of playtime after a short, ten-minute charge and reduces bill of materials by 60 percent 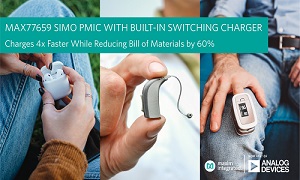 Charging wearables, hearables and Internet of Things (IoT) devices faster and in less space than conventional power management ICs (PMICs) is the new MAX77659 single-inductor multiple-output (SIMO) PMIC by Maxim Integrated. An integrated switch-mode buck-boost charger delivers over four hours of playtime after a short, ten-minute charge. A single inductor powers multiple rails, reducing the bill of materials (BOM) by 60 per cent and shrinking the total solution size by 50 per cent.