Arbe Robotics have announced Lynx, the world’s first long-range, high resolution, 360° sensing imaging radar processing 24×12 channels. Lynx is designed to be a corner and a back radar for L2+ and higher autonomous vehicles, moreover, it can be used as a front radar for driver assist system (ADAS). Lynx delivers effective sensing in all environmental conditions and gathers the data that optical sensors lack, like velocity, long-range, depth perception, and more. Arbe’s Lynx Imaging Radar’s small form factor and affordable price make it a highly suitable sensor and industry-first surround radar capable of enhancing perception and sensor fusion. 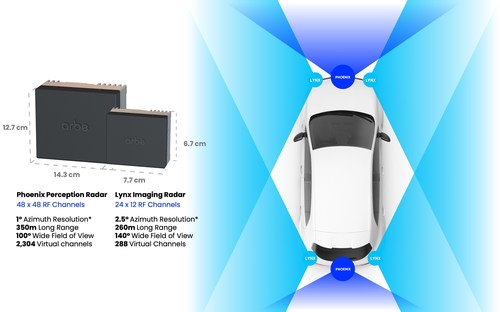 According to the company, the Lynx processes 24×12 channels and is capable of outperforming both the 3×4 corner radars and even 12×16 front radars. making it an industry-first surround radar able to enhance perception and sensor fusion. The radar is designed to complement the Phoenix Perception radar, which processes 48×48 channels. Both the radars will work in sync to deliver unified perception and interference avoidance. Together, Phoenix combined with Lynx, provides full sensor coverage around the vehicle, addressing the different requirements in each position to thus enhancing the safety of the autonomous vehicles.

“Arbe is leading the radar revolution by creating new, enhanced products that push the limits of what radar is able to achieve,” says Kobi Marenko, CEO of Arbe. “For the first time, the industry is being introduced to surround imaging radar that enables true safety and the roll out of advanced autonomous applications. The launch of this new product represents a tremendous business opportunity for Arbe and for our Tier 1 partners.”

The company claims that the Lynx is designed to be a corner and a back radar for L2+ and higher autonomous vehicles. L2+ vehicles will require four to six surround imaging radars per vehicle, integrated on top of one or two perception radars. In addition, Lynx can be utilized as a front radar for driver assist systems (ADAS). Until now, 360° sensing has been performed with corner radars, which were used primarily for ADAS features like blind spot detection, cross-traffic alert, tracking of dynamic objects, etc. However, corner radars notoriously fell short in providing a solution for more challenging use cases like alerting about a vehicle approaching from long distance, identifying stationary objects, detecting the distance between one vehicle and the next, and measuring object shape and size. Lynx delivers effective sensing in all environmental conditions and gathers the data that optical sensors lack, like velocity, long-range, depth perception, and more.