Announced in the month of February 2022, with last date for submissions being 30th April 2022. A number of project ideas were received. Winners to be announced on 4th June 2022.

The EFY Design Contest, was an initiative by Electronics For You group, to inculcate and bring to light the latest innovations. The contest was first announced in the month of February with the submission date being the 20th March 2022. 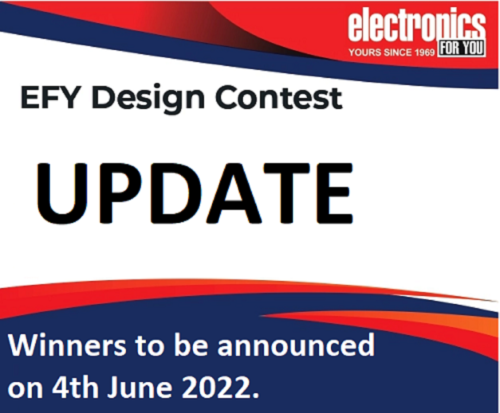 Even though the requirements were working prototype video along with the innovation idea; only the idea of innovation was received with feedback that there wasn’t sufficient time for the rest. Hence the panel of judges decided to extend the submission date to the end of April 2022, post which no more submissions were accepted.

Judges from EFY have gone through every project. From documentation to working prototypes, and are quite impressed by the innovations. It was a tough call to decide the winners. The projects were marked on a 15-point grading scale that includes idea, documentation, presentation and the working demonstration(video).

The amount for the prize winners has also been changed, as most of the shortlisted projects did not have all the parameters needed.

There is also a “Judges Choice Award” category for those projects that were out of the required theme, yet their innovation was beyond excellence.

The prize money for the winner of this award is Rs.2000(+certificate+ebook).

Two runners up prizes are Rs.1000(+certificate+ebook) each.

Winners will be announced on the 4th of June 2022.