Ferrite cores are used to suppress high-frequency noise and signals on the power supply line. Their effectiveness lies in enhancing power quality. 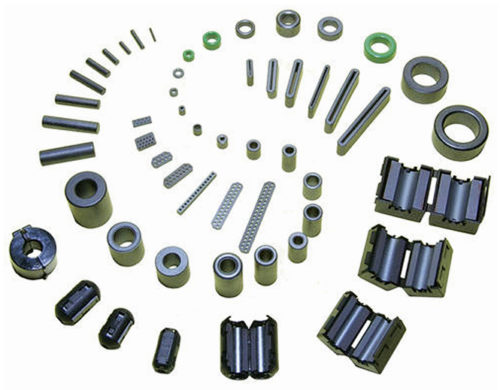 First created in 1930 by Dr Y. Kato and Dr T. Takei, the ferrite core has become one of the most important materials in the electronics industry. The use of the material has increased rapidly, owing to its favourable properties such as low loss of energy and low cost.

According to a market research study, the global ferrite core industry is expected to grow at a CAGR of roughly 1 per cent over the next five years, and will reach a turnover of US$ 1.81 billion in 2024, from US$ 1.73 billion in 2019.

What differentiates a ferrite core from other magnetic materials is its good resistance to high current and low eddy current losses over various frequencies. Coupled with these characteristics, its high permeability and low conductivity make it the ideal choice for many applications such as wide band transformers, high frequency transformers, adjustable inductors and high frequency circuits ranging from 10kHz to 50MHz. Additionally, ferrite cores are used for the control of abnormal oscillation in the relatively low frequency range of tens of kHz to hundreds of MHz. Finally, a word of caution—it should be noted that ferrite cores are quite brittle and can crack or break if dropped or dashed against a hard object.

Types and shapes of ferrite cores

There are two types of ferrite cores based on their chemical composition—manganese zinc ferrite (Mn-Zn) and nickel zinc ferrite (Ni-Zn). Mn-Zn ferrite cores have higher permeability and more saturation levels than Ni-Zn. They are ideal for applications with an operating frequency less than 5MHz. Besides, the impedance of these cores makes them a good choice for inductors up to 70MHz. Further, the electric resistance of Mn-Zn ferrite is effective for inductors up to 70MHz.

The Ni-Zn ferrite cores have better resistivity and high-frequency characteristics than the Mn-Zn ferrite options. The former are ideal for use when the frequency range is from 2MHz to several hundred MHz. They are perfect for inductors over 70MHz. The Ni-Zn ferrite cores are mostly sought for their effectiveness in controlling noise emissions. Also, they are sensitive to temperature, and have a low Curie point (under 500°C).

When it comes to shapes, ferrite cores have a huge advantage over other magnetic materials. They are available in a variety of shapes and geometries, but most of them are ring-shaped. Some of the popular core shapes are the pot (P) core, RM core, drum core, ring (toroid) core, EP core, E core and PM core, among others.

It is very important to check the maximum saturation, L value, core loss and magnetic flux density while selecting ferrite cores. The design of the ferrite cores also matters, as they should be able to protect the abnormal current that gets released from another circuit. A careful selection of ferrite cores is required for load currents that are very high. Choose ferrite cores that are able to withstand the high currents without saturating and losing their resistivity. Also, find out whether the cores possess the right intrinsic properties to counter any malfunctions. To get the best results, make sure the properties/specifications of ferrite cores meet the requirements of the equipment to be used. Whenever possible, look for ferrite cores where the manufacturer has provided details for the impedance vs load current curves. Also, it is good to check in advance the effects of ferrite on the equipment, as any leakage flux can cause a major malfunction. Keeping these factors in mind when choosing the ferrite cores will help to prevent problems related to heat dissipation and voltage drops.

Ferrite cores are used in a wide range of applications, based on their properties, materials, shapes and sizes. Ferrites are used as the core material in most transformer designs and are ideal for broadband transformers. They are preferred for their low energy loss and good frequency response. Ferrite cores are also used in flyback transformer designs, which offer low circuit costs, low core costs and high voltage capabilities. And for signal transformers, the ferrite core has become smaller in size due to space restrictions. However, ferrite cores should meet the inductance requirements under the given working conditions (100kHz). 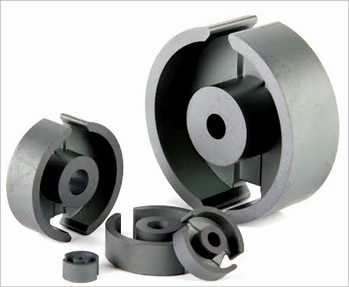 Another application of ferrite cores is in power inductors. The former exhibit low energy losses at high flux densities and temperatures. Besides, they are recommended for their good stability across load conditions.

Ferrites can also be used in noise filters as they are efficient in filtering out high frequency noise energy over a broad frequency range. They convert noise into heat, and are very effective in noise removal. However, they tend to exhibit DC bias current characteristics, which should be taken care of.