Three design elements that influence testing
The size of the DUT decides the measurement method and test duration for radiated emission and radiated immunity testing. As size of the object increases, the mechanical structure needs a good number of additional screws and holes to fix it. The additional slots and angles that come up to support the structure act as source of radiation, increasing the challenge faced by the engineer during compliance testing. 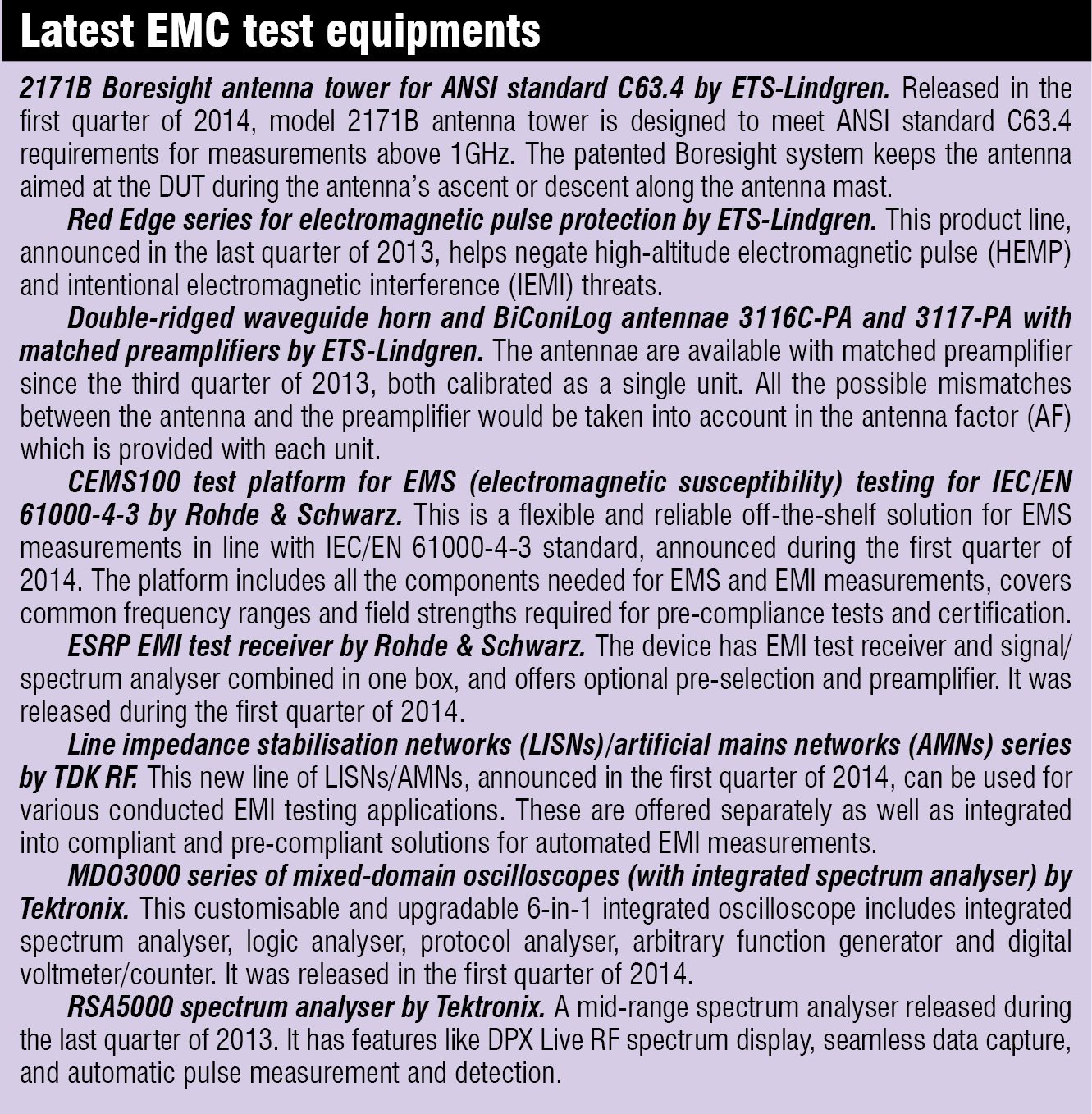 The complexity of its antenna pattern also increases with the size of the test object. “The antenna pattern complexity affects the number of orientations necessary to determine minimum immunity and maximum emission,” says Vishal Gupta, application expert at Agilent Technologies India. This also has implications for EMC standards.

If your system’s power consumption increases, it might result in the system requiring an active cooling system. This, in turn, demands for ventilation, creating openings that cause the radiation levels to increase, making it difficult to identify the source of radiation.

Similarly, with more number of cables, the tests will have to be done on each cable. Hence, for larger devices, more exposure is needed to measure gauge susceptibility and emissions. Moreover, the turntable or test chamber needs to be large to accommodate bigger equipment.

Very-near-field technique of EMC testing
The terms far-field, near-field and very-near-field describe the fields around an antenna. Near-field is less than one wavelength (λ) from the antenna and far field begins at a distance of 2λ and beyond. With the right implementation, any antenna can be successfully measured on either a near-field or far-field range. Ideally, far-field ranges are a better choice for lower frequency antennae and where simple pattern-cut measurements are required, and near-field ranges are better for higher frequency antennae and where complete pattern and polarisation measurements are required. The near-field is generally divided into two areas, the reactive and the radiative. The reactive region is what we call the very-near-field.

Quick, repeatable, real-time data. According to Erkan Ickam of EMSCAN, a leading developer of fast magnetic very-near-field measurement applications, “Traditional EMC far-field techniques measure the emissions levels; they are not useful for small, printed circuit board assembly (PCBA) level diagnosis as they can’t point at the source of emissions on the PCB.” The very-near-field technique is fast and repeatable; interaction with DUT is unavoidable in this area. “It can measure the entire PCB continuously to make sure intermittent events are captured even when they occur in areas of the board that are not expected to radiate,” he adds.

In other words, very-near-field technique is a good method to quickly identify localised hot spots at a PCBA level. It lets you identify frequency content of emissions and make spatial maps of the currents at each frequency as they occur on DUT. These spatial maps give information to test engineers about where the ultimate source of EMC emissions are, at the PCB level. These very-near-field spatial maps cannot be directly compared to any existing EMC standards like IEC and ANSI; they, however, provide insight into troubleshooting or root-cause analysis for any standard.

Complementary to all standards. Very-near-field testing is a pre-compliance tool and there are no standards for EMC pre-compliance. An example is the EMxpert by EMSCAN. Regardless of the standard, when current EMC chamber measurements indicate a failure, the test results do not generally indicate what the cause of the problem is. This is where a quick measurement utilising very-near-field is extremely valuable. It will indicate the source of emissions, coupling paths, resonant points, shielding issues as well as many other potential problems. This can help the engineers track down the problem quicker and make proper changes to the design.

Indoor testing. Another advantage cited for near-field measurement techniques is that testing can be accomplished indoors, eliminating problems due to weather, electromagnetic interference, security concerns, etc.

Drawbacks. Each hotspot seen in very-near-field probing is an independent vector by itself. Unless the magnitude and polarity of these independent vectors are quantified, convergence to real-lab measurements cannot be assured. Another issue is that the DUT must be smaller than the scanner for pre-compliance. The device should be disassembled for testing.

Testing at the component level
P. Chow Reddy suggests that, to test at component level, make a simple loop probe with a coaxial cable that could be connected to the spectrum analyser. One end of the cable can be stripped and centre wire extended to the braid of the shielded wire. This forms a complete loop with respect to the shield. This arrangement picks up radiations in the loop and transfers to spectrum analyser and hence gives a rough picture of the radiation level.

To specifically identify the radiating component, strip a thin-shielded wire with braid, make the centre wire into a small loop and solder it on to the braid. Then drop silicon sealant on the loop. This forms a mini probe. With one end connected to a spectrum analyser, this probe can be brought close to the specific components to analyse the pickup radiations.

Antennae tuned to particular range of frequencies and resonances are readily available in the market. These can be used to get a very brief picture of the radiations in open labs.